Do Miracles Still Happen? What Is Their Purpose? 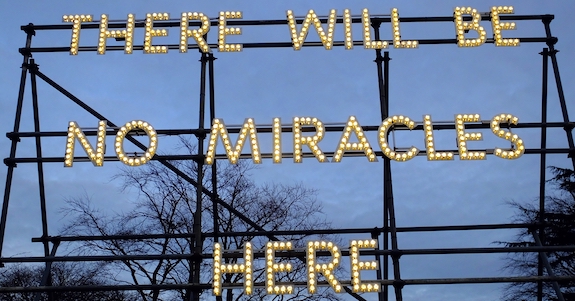 Following the success of an earlier edition of his Institutes, John Calvin addressed King Francis I in the preface to a 1535 French edition. This preface was mostly an appeal for the king to bring an end to the Roman Catholic persecution of French Protestants. So, under a few headings, Calvin answers charges that were being levelled against the continental Reformers, ranging from their supposed break with Christian orthodoxy—namely the Patristics—to the nature of the church. In a recent rereading of this Calvin’s address, I was struck anew by one of the claims made against the Reformers: they didn’t perform miracles.

Linked with accusations that the Reformed movement was “of recent birth,” the Roman Catholic Church pointed to the their lack of signs and miracles to back-up their “new” proclamation. Similar charges can be heard today, coming from Pentecostal and Charismatic corners. Miracles, it is claimed, serve to authenticate Christian leaders and movements. Where those miracles are absent, so the logic goes, we should be asking questions about whether God is really at work in those places. But is this a correct view of miracles? Are they always evidence of God’s presence? And should we uncritically follow after men and women who perform them? Should we even expect them?

The Gospel Doesn’t Depend on Miracles

Calvin’s first line of defence is that the Reformers were “not forging some new gospel.” He writes, “He who knows that this preaching of Paul is ancient, that ‘Jesus Christ died for our sins and rose again for our justification’ [Romans 4:25], will find nothing new among us.” And so, before any discussion about miracles, Calvin argues that the authority of Reformed doctrine resides in its “antiquity.” Against the criticism that the Protestants were innovators, Calvin affirms their commitment to recovering orthodox Christianity and the Bible’s authority over God’s Church.

Herein is an important corrective for us, living half a millennium after the Reformation and two millennia after the early church. As much as we can expect God to move in unforeseen and powerful ways, these won’t contradict what God has already revealed about himself, nor what he says in Scripture. We should pray for God to act mightily in our time—whether that is through healings or revival—only these prayers should not stem from a passion for novel words and incredible events. Whatever “greater things” God might do in our day, they will not detract from the crucified and resurrected Son of God.

So, before considering the place and importance of miracles, we must carefully consider our message. Calvin started his defence of Protestant theology by tracing its lineage through orthodox Christianity and back to Scripture. No proclamation, whether it is propped up by miracles or not, should run counter to or omit that gospel. In fact, we should be uneasy when preaching and teaching is radically novel and not rooted in our theological tradition—regardless of how many miracles accompany it. We should be able to insist that, “We are not forging some new gospel, but are retaining that very gospel whose truth all the miracles that Jesus Christ and his disciples ever wrought serve to confirm.”

Following the previous point, doctrine remains superior to miracles. Put another way, God’s truth is authoritative in and of itself. Here Calvin helpfully reminds us of the “legitimate purpose and use of miracles,” which is confirmation of the gospel (Acts 14:3; Hebrews 2:4; Romans 15:18-19). He asks, “When we hear that these are the seals of the gospel, shall we turn them to the destruction of faith in the gospel?” Calvin’s question is bracing for, considering their use in the New Testament era and writing, miracles always have a secondary and supplementary role within God’s economy. As Robert Letham writes, they are only signposts and never spectacles.

This is another important corrective for the contemporary fixation on miracles and signs, especially appeals to them for validating a man of God or new ministry. Miracles function to confirm God’s truth, the gospel message, ultimately the person and work of Jesus Christ. Though Jesus’ miracles went some way towards establishing his messianic claims, even he emphasised preaching and teaching. Thus, citing John 7:18 and 8:50, Calvin writes, “If one does not tend to seek men’s glory but God’s, this is a mark of true doctrine, Christ says. Since Christ affirms this test of doctrine, miracles are wrongly valued that are applied to any other purpose than to glorify the name of the one God [Deuteronomy 13:2].”

A damnable inversion of John the Baptist’s words in John 3:30 runs rampant in many corners of the church today. For through sensational miracles and incredible signs men and women are growing their personal brands and ascending to celebrity status among God’s people. These ministries tend to glorify mighty men and women. Yet John insisted, “He must increase, but I must decrease.” Where miracles operate to make much of Jesus and his gospel, God be praised. But when they serve Christian leaders and are used to prop up outlandish teaching then they no longer fit within God’s design. This brings us to one final point.

God isn’t the Only Source of Miracles

Finally, Calvin says “continual miracles” may be the result of a “strange power”—a power other than God’s. Developing this thought, in Baptism And Fullness, John Stott argues that the genuinely miraculous can be traced back to one of three sources: the demonic, the psyche, and God. So, against those who point to miracles as undeniable evidence of God’s blessing, we might point out various examples of miracle workers in the New Testament—who weren’t emissaries of God.

To pick up just two examples, Calvin notes that “Satan has his miracles” (2 Thessalonians 2:9-10), being able to disguise himself as an angel of light (2 Corinthians 11:14). Secondly, Jesus warned his disciples about false prophets, workers of miracles (Matthew 24:24). Now, I’m not exclusively attributing miracles to Satan or false prophets. Rather, as Calvin notes, we should be aware that, “Magicians and enchanters have always been noted for miracles. Idolatry has been nourished by wonderful miracles, yet these are not sufficient to sanction for us the superstition either of magicians or idolators.”

Herein is one final corrective, perhaps the most uncomfortable. Not all miracle have their origin in God, which explains why not all miracle workers use them as a platform for his glory and gospel. Throughout this section of his letter, Calvin cites Deuteronomy 13:2, where Moses warns against miracles that draw people’s attention away from the one true God. When those who perform miracles become spectacles rather than using their works as signposts to Christ, even if they call themselves ‘Christian pastors,’ we are dealing with the spiritually perilous rather than the Spirit of God.

Fix Your Eyes on Jesus

Perhaps a little tongue-in-cheek, though undoubtedly with sincerity, Calvin concludes this section by writing, “We are not entirely lacking in miracles, and these very certain and not subject to mockery.” Remarkably, Calvin’s initial response to the charge that the Reformers didn’t perform miracles wasn’t an object lesson. Instead he provides us with an important theological one. This lesson is that miracles are only ever secondary and supplementary to God’s revealed truth, in the Bible. Therefore the litmus test of miracles is not eyewitnesses or incontrovertible evidence; it is whether they make much of Christ and God’s glorious gospel message.