Galatians: The Lord's Anointed may be Accursed

If you are a Christian then there is a good chance you have observed, or even received, the stern reproach: ‘Don’t speak against the Lord’s anointed.’ It is one of those declarations dripping with piety and a zealous concern to protect Spirit empowered leaders, apostles, and prophets. But more often than not, it is an excuse for theological ignorance and the undiscerning acceptance of influential, charismatic, and public Christian figures, regardless of what they preach or teach. It is, after all, much easier to meet criticism with a phrase that reveals your reverence for God’s mighty servants and the refusal to be dragged into an ungodly squabble. 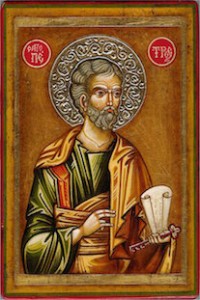 Now meet Peter. John may have been the disciple Jesus loved, but Peter is the disciple we love. He frequently overestimates his devotion to Christ and is subsequently humbled but also graciously accepted by Christ. In what N. T. Wright calls the ‘Peter cycle,’ we are offered a window into the Christian life, “Firm public declarations of undying loyalty followed by miserable failure, followed by astonishing, generous, forgiving love." But we often think that that is the pre-Pentecost Peter. For at Pentecost Peter becomes a great hero of the early church. Wrong. Peter, like all Christians, was an object of God’s grace, throughout his life. He was far from perfect, despite his special appointment, Spirit anointing, and apostleship. Peter erred and was not above rebuke.

What does this have to do with Galatians or those who claim to be the ‘Lord’s anointed’? In Galatians 2:11-14, the apostle Paul recounts a striking event in the life of the early church, when he publicly opposed the apostle Peter. And he does so for reasons similar to his refusal to circumcise Titus, in Galatians 2:3-5. Paul boldly challenged any practices that threatened or obscured the gospel of grace (1:6-9). Peter was undoubtedly a giant in the early church. Paul on the other hand was a relatively unknown itinerant preacher who spent an earlier part of his public career killing Christians (1:23-24). Yet when he sees Peter behaving hypocritically (2:13) and out of step with the gospel (2:14), Peter’s status, title, feats, and fan club mean nothing. Paul is uninhibited in speaking against a man who might rightly be called the Lord’s anointed, second only to Jesus.

Paul’s language is unapologetically severe, claiming that Peter’s behaviour meant that he stood condemned, grossly in the wrong (2:11). Peter’s inconsistent conduct was leading others, including Barnabas, astray (2:13). And the implication of his withdrawal from table fellowship with Gentiles subtly implied that they needed to keep the Old Testament law and live like Jews (2:14). Earlier in the letter, Paul wrote that anyone preaching a gospel other than the one true gospel is accursed, under the judgment of God (1:8-9). It does not seem that Peter’s hypocrisy placed him in that category, but his misunderstanding warranted a stinging reproach. Even the apostle Peter got things wrong and repented. There is a reassuring familiarity in the blundering apostle, but also a noticeable humility and willingness to be challenged, even repent. Your leader might call himself the ‘Lord’s anointed,’ but if that means he is beyond being challenged and corrected, perhaps he is not the great leader he claims to be.

« Galatians: Did Paul Deny the Truth of the Gospel? Galatians: Faith in Christ or the Faithfulness of Christ »
comments powered by Disqus