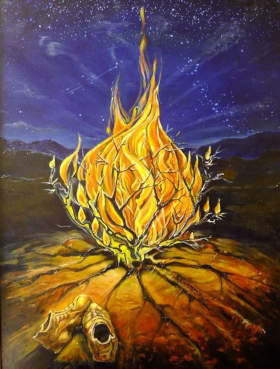 Normally when we read the Old Testament (which doesn't happen too often for most of us), we are moving too quickly to notice details that make sentences sound weird. We tend to allow sentences like Exodus 15:3 (“The Lord is a warrior; // the Lord is his name”) or Amos 9:6 (“He summons the water of the sea and pours it out on the earth’s surface. // The Lord is his name”) to wash over us. But, when we read these verses together, it is hopefully surprising to hear that his name is “the Lord.”

There's a long history as to why but in both of these verses, “the Lord” is actually a translation of the name of God in Hebrew (YHWH - probably vocalised as “Yahweh”). Because this is probably familiar ground for many readers, I will simply note that the Greek Old Testament uses "Lord" like the English does and most English translations use small capital letters to mark out the divine name in the OT. The name “YHWH” only occurs in the OT because it's a Hebrew word and the NT authors, writing in Greek, use "Lord" (that's probably, at least in part, because they were concerned about keeping the commandment against taking the Lord's (YHWH’s) name in vain. In the rest of the post I will use Lord and YHWH interchangeably.

So the name of the “Lord” in the OT is actually YHWH, but this raises an interesting question:

To whom does “YHWH” refer?

The answer to the question is not immediately obvious. If it seems obvious, pause and recall that Christianity affirms a Triune God. Now try to answer the question again. In my experience, most people read as though YHWH refers to the Father. After all, Jesus only comes in the NT and, for the most part, the Holy Spirit only seems to do stuff in the NT as well. What's more, in the OT they didn't know about the Trinity, they only knew that there was only one God.

But why should YHWH refer to the Father in particular?

The challenge and point of this post is to have you read YHWH as a reference to the Triune Godhead—Father, Son and Spirit, all at once!

Three Reasons to Read LORD as a Reference to the Trinity

First, because the Son and the Spirit are active in the OT. Often we hear that both Son and Spirit are active in creation but this is true through all of history because one of the things we know theologically is that if Father, Son and Spirit are truly one God, their activity is inseparable. Theologians refer to this as "inseparable operations" and explain it by saying that the Father acts in history by the Son and through the Spirit—what those prepositions mean in reality, I do not know, but they tell me that the Father does not act independently of the Son or of the Spirit. Reading “YHWH” as a reference to the Trinity acknowledges that the Godhead is active in the OT.

Second, the OT gives no reason to assume that the name of God should refer to only one member of the Trinity. Of course, OT believers didn't understand the Trinity but this only reinforces the point: OT believers believed in one God who we now know to be Triune. If they thought the one God's name was YHWH, surely that name would refer to the One Triune God?

Third, there are times in the NT where an OT passage that uses the name YHWH is quoted and the NT applies it to Jesus. For example, in Romans 10:13 Paul tellingly quotes Joel 2:32 saying “Everyone who calls on the name of the Lord will be saved”. In Joel “the Lord” is YHWH but just a few verses earlier Paul was pretty clear that “If you declare with your mouth, “Jesus is Lord,” and believe in your heart that God raised him from the dead, you will be saved” (Rom 10:9). The point here is that it's correct to say “Jesus is God” but not “God is Jesus” because God is Triune and Jesus is one member of that Trinity.

Let me repeat that I don't think OT believers would have understood this. But I do think that reading those capitalised references to "the LORD" as a reference to the Trinity will help us remember that Jesus and the Father are not the loving/angry independent, contradictory sides of God. It will remind us that God is fundamentally relational because he exists in Trinity.

This post has a bonus point though. One of the core convictions of Christianity is that we know God (the Triune God) through Jesus who reveals him to us. Think of what Jesus says of himself in John 1:18, "No one has ever seen God; the only God, who is at the Father's side, he has made him known." Those are confusing words but Jesus says similar things throughout John's gospel. He is the one who reveals God to the world. So maybe, just maybe, if YHWH is the revelation of God in the OT, we should consider reading YHWH as a reference to the second person of the Trinity: the Son, rather than the Father or even the Godhead as a whole! Right now I prefer the Trinitarian option, but this alternative certainly seems possible.

P. S. If you're interested in thinking about why the Trinity is important - I wrote about that a while ago here.