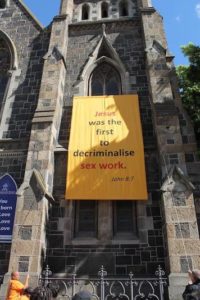 Just over a year ago, Central Methodist Mission (CMM), in partnership with a local organisation for sex workers, printed and hung a large yellow banner that read: ‘Jesus was the first person to decriminalise sex work (John 8:7)’. In case you are wondering, the verse goes, “As they continued to ask him, he stood up and said to them, ‘Let him who is without sin among you be the first to throw a stone at her.’” As a student of theology I have encountered a fair share of embarrassingly specious proof texts yet this is arguably one of the best—and by “best” I trust you know I mean worst, not to mention one of the most laughable. Yes, I am aware that a church that officially offers outspoken support of prostitution is almost certainly unconcerned about what the Bible actually says. Yet I worry that their misreading of the biblical text and misappropriation of Jesus in support of something unequivocally unbiblical has resulted in some confusion. Briefly below I intend to offer some clarity to an issue where ideology and virtue signalling has eclipsed the truth about Jesus Christ. This will be done by thinking a little more about John 8:7.

Firstly, John 7:53-8:11 is a canonically disputed text. In other words, many of the earliest and most reliable manuscripts either do not include it or place it elsewhere, in both John and Luke. I know that issues surrounding manuscripts are prickly for those in the know and bemusing for those who are not. Basically, there are questions around the authority and place of this text. This should immediately cause us to raise questions over its use. But we might ignore these textual critical squabbles. If we treat the text as not only historical - which it might be - as well as inspired can we argue from it that Jesus decriminalised prostitution? When we look at the text and read it as a whole we arrive at a second important point. In John 8:3 we are told that this woman was “caught in adultery” explaining why this text has traditionally been called the pericope adulterae. We might infer from the text that she was a prostitute but the argument is weak because the New Testament has another word for prostitute (see Matthew 21:31-32; 1 Corinthians 6:16). That word is not used here. Thirdly, and the reason I used the word “laughable” earlier, in the last verse of this section Jesus says, “Neither do I condemn you; go, and from now on sin no more” (8:11). Yes, Jesus does not condemn the woman. However, even if she was a prostitute - which is unlikely - Jesus does not condone her lifestyle; he calls it sinful. One of my favourite authors often refers to “delicious irony,” and I am sure that citing John 8:7 to support the decriminalisation of sex work qualifies for that honour. By loading the text with very improbable details the end result is Jesus calling sex work or prostitution a sin that must be stopped. Remarkable.

This post is longer than I initially set out to make it. For that I apologise. Please allow me to make one final point, in conclusion. Writing in the 20th century, German theologian Karl Barth referred to God’s action as “disruptive grace.” It is an arresting phrase. Today grace seems to be treated by many as something God sprinkles over our lives, however we choose to live them. We think of it as a dismissive wave of the hand, granting permission while expressing love. But that could not be further from the biblical doctrine of grace or the effects of God’s love. If we hold that John 7:53-8:11 belongs in Scripture then we should not miss the narrative's climax. Jesus disbands the mob, bent on justice against a known sexual sinner. Whether she was a prostitute or simply promiscuous Jesus wants something better for her. But this is no mere escape from narrow-minded moralists; it is a story depicting the love of Christ that disrupts both the crowd and this woman’s life. As much as God’s love is not indifferent to how people are treated neither is he unconcerned with how you live. Jesus demonstrated an incomparable compassion and love, throughout the Gospels and ultimately at the cross. It is a sickening sleight of hand to reduce that love to unconditional affirmation . God loves us too much to let us go our own way, living in destructive sin. His grace is disruptive. His love is directive. “From now on sin no more.”

« Pastor, Sit Lightly on the Wisdom of the World Who is YHWH? »
comments powered by Disqus