Who is Easter for? The Woeful Exchange 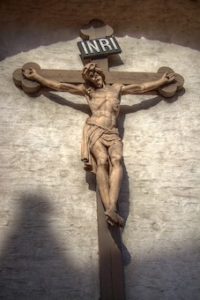 Despite the cultural forces that persistently sideline the celebration Easter in favour of Christmas, for most Christians Easter has retained its significance in their lives and faith. However, in my admittedly limited experience and therefore tentative opinion, many churches work against the church’s historical, traditional and deeply biblical emphasis on Easter weekend. How is this done? In South Africa some hangovers of Christianity remain, in even the most secular societies. Because of this, with some certainty, churches can predict unusually large numbers in attendance over Easter weekend. Those making their annual pilgrimage are - rightly or wrongly - deemed non-Christians. So Easter is considered an “evangelistic highpoint” or “mission focal point” in the year—and is treated as such. This ungainly pragmatism masked as evangelistic mindedness is almost as trite as it is tragic. It is, as the title of this post suggests, ‘the woeful exchange’.

Some readers will be familiar with the similar phrase, which I am playing on, ‘the wonderful exchange.’ Though that exact phrase is not found in the New Testament the truth of it is plain throughout. One of my favourite occurrences is in 1 Peter 2:24, “He himself bore our sins in his body on the tree, that we might die to sin and live to righteousness. By his wounds you have been healed.” You could spend an entire sermon unpacking the glorious truth wrapped up in that short verse, along with its context: Christ’s crucifixion is for our sins, in that he bears the punishment for rebellion against God even though he was only ever righteous. The purpose of his death was that we might become righteous, as we die to the self-destructive patterns of sin and live a life patterned after Christ’s. The effect of Christ’s death is healing, being made well or whole, restored to the image God originally created us in. Other verses are clearer that in the exchange we are credited with Christ’s righteousness (Romans 1-3). But this post is unfortunately about the woeful rather than the wonderful exchange.

It is your Good Friday service and the auditorium is packed. Stewards are frantically waving to each other in search of empty spaces or more chairs. The atmosphere is electric as the band does a final check on stage before your most energetic service (or worship) leader steps forward to start the show—I mean- church gathering. The vibe steadily grows as people speak over each other and compete against the carefully selected ‘outsider friendly’ playlist pouring from the speakers. It is almost time. This is it: ‘go big or go home'. Once the almost unrecognisably bare liturgy is out of the way we come to the Bible reading. But it is when the preacher stands up that the woeful exchange is at its ugliest. Instead of holding out the gloriously rich treasures millennia of Christians have celebrated at this point in the year the gathered church is told that Jesus died for our sins. In fact, the gathered church, probably making up the majority of those present, are forgotten entirely in order to present a lazily rehashed sermon about the cross. The woeful exchange leaves believers with almost nothing to reflect on because they were not even considered.

At this point some readers will be hastily offering a retort: ‘The same gospel saves non-Christians and transforms believers.’ True, if reductionistic. For example, if all that was needed to nourish Christian faith and mature believers was the cross why did God provide us with a gospel tapestry of 66 books? Why did he present his character and love in a range of genres, through a host of unique human voices and emphases? I mean, if it is the same gospel - i.e. the cross - why do we ever wander outside of the four passion narratives found in Matthew, Mark, Luke and John? If we affirm that all of Scripture finds its centre in the person and work of Christ then why do we retreat to a simple passion text and sermon on Good Friday? I have become convinced that the answer to my last question - the only one that was not rhetorical - is that many churches are guilty of the woeful exchange. Perhaps if we spent more energy in presenting the splendid riches of Christ’s work at Easter rather than offering the same old tired and predictable gospel presentations those visitors would be gripped by God’s truth. Do not ignore the fact that those in your church desperately need Easter themselves. Hold out the wonders of the gospel. Do not pragmatically trade it in this Easter.

This post fits roughly with a short series on the work of Christ. The first challenged the overly narrow view of Christ's death as a legal event, highlighting for Christians the love of God. The second explored other aspects of the atonement, reminding Christians that God's work is much richer than Christ in our place (the wonderful exchange), for faith is deeply transformative. Both posts bemoaned presentations of Christ's work as merely external; it is rather the unparalleled evidence of God's love that is effective in making us those who love like him.

« The Work of Christ: Not Merely Substitution Jesus' Resurrection and the Christian Life »
comments powered by Disqus