The road to Emmaus and all the things concerning Christ...

The adventures of leaving theological training to starting in full time church ministry present to me familiar challenges that my three years of training could not solve. And one such challenge is the question of how to preach the gospel from the Old Testament. As Christians we believe that the Old Testament is Gospel literature. And this is warranted by the fact that the Apostles preached about Christ by quoting the Old Testament (OT). Not only did they quote from it but it was the only inspired scripture of the early apostolic church. Such that Paul could say to Timothy that the Scriptures he was taught from childhood (i.e. OT) are profitable for training in Salvation. And there’s plenty more evidence of the fact that the OT is a Gospel literature. But the question that poses a challenge to me whenever I encounter the difficult passages is: How is does this passage teach the Gospel?

My intention is not to answer the question but to explore some of the grounds which we build our foundations on. The fresh and popular approach to interpreting the OT is called Biblical Theology. As a theological discipline, Biblical Theology looks at the Bible as one big story that ultimately points to Christ. The framework is normally “creation-fall-redemption-new creation” (or something along those lines). So the story of the Bible, according to Biblical theology, should be seen through the lens of God’s redemptive plan. And because the redemptive plan of God culminates in the revelation of Christ (as Hebrews 1:1 suggests), then every passage is interpreted with Jesus in view. So, whenever a difficulty arises on terms of understanding a particular passage, the answer is of course Jesus. As a general framework this is helpful, but my question is: does every OT detail point specifically to Christ? 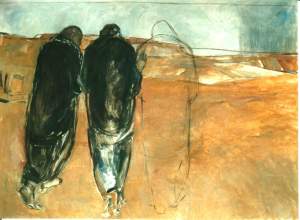 The famous passage that is often used to prove this is at the end of The Gospel of Luke: the encounter with Jesus on the road to Emmaus. In one interview, Graeme Goldsworthy (one of the proponents of Biblical Theology) says that when he shows people the unity of the bible he normally starts them off with “Luke 24, where he [Jesus] points out that the whole of the Old Testament is about him” (see here). This is primarily based on the word of Luke: “beginning with Moses and all the Prophets, He interpreted for them the things concerning Himself in all the Scriptures”. But I want to challenge this as a foundation to conclude that the whole of the Old Testament is about Jesus.

I might be misrepresenting Goldsworthy’s argument but I do know that what Luke 24 says is not that it all points to Christ (whether that’s true or not). The key to understanding Luke 24 is obviously in its context (the Conversation with Cleopas).  The death of Jesus left people without a hope that he was the chosen messiah who would redeem Israel. So beginning with Moses (the first five books) and the rest of the Bible, Jesus proved to them that the OT did speak about the death and suffering of the Messiah; meaning that Jesus pointed out specific places in the OT that pointed to him. So, Jesus is not saying that the whole OT is all about him, but that there are things written about his death and suffering as Messiah in the OT; and that the people should not loose heart as if his death was a defeat in God’s plan. The scriptures from Moses to the prophets speak about the suffering and glory of the Messiah.

So I think that the phrases “everything written about Me” (24:44) and “the things concerning Himself in all the Scriptures” (24:27) refer to specific OT passages that speak distinctively about Jesus. However, this does not disprove the fact that the OT is a grand narrative about God’s salvation. But it dispels the false foundations on which we built some of our frameworks of BT. Therefore Jesus on the road to Emmaus was not giving a lesson in how every bit of the OT points to him. Rather, to restate the point, he was showing them how specific passages in OT testified about how the promised Messiah would suffer and be raised to bring salvation.

The question of how the OT is Gospel literature still remains a challenge. But from the perspective of Luke 24 we can at least conclude that Luke was not teaching that our interpretation of the OT is a simple formula of “what does this teach us about Christ”. And obviously we can’t draw general conclusions about the framework of BT. But Luke does not teach an “all points to Jesus” framework.
This needs to be qualified but I’ll leave room for comments…

« How can God become King? The Son of God and Jesus Christ Doodle: Idolatry Of The Lesser Known »
comments powered by Disqus