The Magician's Nephew: A Strange but Familiar God

My wife and I recently decided to work

through C.S. Lewis’ The Chronicles of Narnia. Growing up functionally illiterate, in a non-Christian home, meant that I stumbled into Narnia as an adult. Yet the subsequent comings and goings between my world and Narnia have retained the wonder of childlike discovery, and I cannot imagine that familiarity will ever dull my enjoyment Lewis’ resplendent masterpiece. Aiming to reflect on one chronicle a month, I hope to offer short posts sharing the light shed by each rereading, starting here with The Magician’s Nephew, though I think the point picked here applies to the entire series.

Referring to the Lewis' entire Narnia narrative, the former Archbishop of Canterbury, Rowan Williams, argues in The Lion’s World that Lewis was not trying to simply translate or repackage Christian doctrine. Instead the stories evoke what it feels like to believe in the Christian faith. Thus Lewis offers his readers the opportunity of encountering what they think they know for the first time. This is no truer than Lewis’ portrayal of Aslan, the Christian God.

Lewis cleverly exhibits this in the character of the Cockney Cabby. Standing in the dark and unformed Narnia, Aslan begins to sing, “[What] was, beyond comparison, the most beautiful noise he had ever heard. It was so beautiful he could hardly bear it” (p61). Ironically, the Cabby exclaims, “Gawd,” as the Voice resonates with their souls and raises the new Narnian landscape. Then, alongside Digory and Polly, “[With] open mouths and shining eyes; they were drinking in the sound, and they looked as if it reminded them of something” (p62). “The earth was of many colours: they were fresh, hot and vivid. They made you feel excited; until you saw the Singer himself, and then you forgot everything else.” It is God indeed who the Cabby sees in the fresh light of Narnia’s young sun. Though however magnificent the newly created world is, and long before Jadis’ evil has sunken deep roots there, the Singer rather than the song demands the audience’s attention.

After addressing the animals and before Aslan establishes the Cabby and his wife as the first king and queen of Narnia, he asks the Cabby (p81-82), “I have known you long. Do you know me?” The Cabby replies, a little perplexed, “Well, no, sir. Leastways, not in an ordinary manner of speaking. Yet I feel somehow, if I may make so free, as ’ow we’ve met before.” To which the Lion says, “You know better than you think you know, and you shall live to know me better yet.” The Cabby is then asked if he would like to stay in Narnia, where he would not only rule but also come to know Aslan, without the obstructions of the world he knew, back in London. Lewis does this for us, his readers, too. We are invited to encounter our Creator, who does not merely invest his creation with the marvellous richness of his own mind but installs us as his honourable rulers. This is the story that we think we know, even possessing some vague recollection of, yet choose to forget. 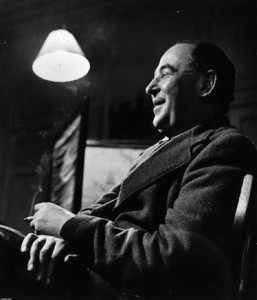 Aslan is at the same time both oddly familiar and unsettlingly strange. The Cabby knows this Lion. And so do we. For this is no mere literary character, he is the immense God that Lewis loved. This God lends great dignity to people. He searches them out, drawing them to himself. He steps across worlds in order that they might know him. As Rowan Williams writes, “In a word, what Lewis portrays with such power and freshness in Narnia is simply grace: the unplanned and uncontrolled incursion in our self-preoccupied lives of God’s joy in himself.” But, and it is apt that the last word comes from Aslan, full of regret and a heavy heart, when he describes Digory’s uncle the magician, “Adam’s sons, how cleverly you defend yourselves against all that might do you good” (p98).

« How Literary Criticism has Damaged Our View of the Gospels Doodle: Driscoll, Perilous Negativism, and the Apostle Paul »
comments powered by Disqus