Stop What You're Doing and Read 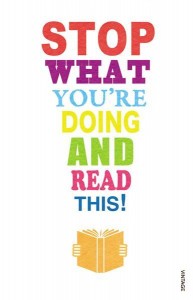 I recently picked up a short collection of essays titled Stop What You’re Doing and Read This! The title caught me – not to mention the bright cover – because I am passionate about literature and convinced that we should carve out time in our busy lives to read. Not only am I troubled by the lack of reading today but have elsewhere observed an obverse trend: the consumerist approach to books that fails to engage with their ideas and prefers volume to deep reading. After reading Stop my zeal to see the prioritising of literature was heightened. So I hope this post will both serve as an appetiser for the collection and create a hunger for reading good books.

The best place to start, in my opinion, is with Blake Morrison’s essay, which for the most part remarks on how books provide readers with hope beyond where they find themselves, however dire; he argues that literature allows us to breathe when our surroundings are suffocating. Any lover of reading knows this. But the point I want to pick out from his piece touches the canonical works of literature. In a culture obsessed with entertainment, resistant to sustained and thoughtful engagement, we find that older (and, most often, larger) books involve too much effort and are sorely lacking in event. But, referring to the canon, Morrison writes, “Some books are simply better than others. Or last the course longer. Or grow richer the more they are reread.” With the postmodern insistence on subjectivity and self we are determinedly independent and suspicious of established narratives. However, Morrison’s necessary point for today is this: “If we see the canon not as social-conditioning…imposed from above, but as a collective of writers’ and readers’ enthusiasm, then there’s no reason to resist.” Recognised and recommended literature, especially those works belonging to the canon, should be added to our reading lists. As another contributor, Tim Parks, writes, “Life is simply too short for the wrong books, or even the right books at the wrong time.” 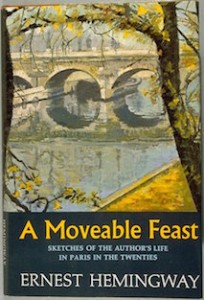 The next point I want to pick up on is the unique ability of literature, not possessed by any other art medium, to help us feel the human condition. We are so over gorged on series and films, the effortless and explosive entertainment flying off our screens, that we overlook what is undoubtedly a healthier medium: paper. One of the contributors, Carmen Calill, probably overstates this point, arguing that without the connection of words, thoughts and stories we will die. Though I do agree that without literature our internal lives will suffer, as we glut ourselves on stories made to sell through gripping viewers and grabbing awards. Mark Haddon believes that when you, “Lay the novel alongside film...its specialness becomes obvious…[Film] can’t do smell or taste or texture. It can’t tell us what it is like to inhabit a human body. Its eyes are always open. It fails to understand the importance of things we don’t notice.” Haddon is convinced that the novel will endure because it comes closest to revealing the “texture of life” and “the mystery of what it means to be human.” Anyone who has invested time into engaging with exceptional literary works, will admit to the screen’s relative poverty and readings’ probing power, which is sometimes unnerving yet always enriching.

Following on from the previous paragraph, Jane Davis makes an incisive point about our fear of deep reading. While her issue is with the preference for light reading I would extend it to our obsession with film, “The plea for lightness may be a natural and entirely understandable fear of getting serious: lots of us spend a great deal of time not thinking, for fear of being brought down.” A little later she adds, “It is easy to see why, when dealing with literature or life stuff, people think it better if we stick to the surface of things and splash around up there, lightly pretending there are no depths.” We might think this is harmless, and because life is so demanding we are justified in sticking to the shallows and superficial engagement with the human condition. But Davis thinks the opposite, suggesting that, “Consistently ignoring the inner life has put depression and anxiety high amongst the world’s most serious epidemics.” I admit that this conclusion seems far reaching, but listen to what Davis adds, “Despite our desire to amass, consume, and be mindless, the ‘unspeakable desire’ to know ‘our buried life’ is ancient and implacable. If we ignore it, or have no means of knowing it, that desire will come back and hurt us.” Our fondness of film, more often than not, indulged at the expense of deep interaction with literature is a cost that we fail to consider; it damages our inner lives and numbs us to the depths of human nature.

Lastly, hopefully tying some of the above points together, I want to develop another fascinating point made by Jane Davis. She suggests that religions’ fall from grace, over the last century, as an interlocutor in the discourse of common life has not only impoverished our language for contemplating the human condition but has also in many ways been the demise of community. She posits that members of faith groups are more likely to flourish as religions provide people with a “network of fellow supportive creatures, a sense of purpose”. Religion, according to Jane Davis, offers us “inner stuff, scaffolding to help us get around our inner space” and meaningful community; maps to explore the complexities of our humanity and safe groups where such ventures are encouraged. The reason I find this point so interesting is that while I agree with Davis that a “reading revolution” will help us to reinvestigate the human condition and even result in new communities formed around good literature, I also believe the Christian story that plumbs the depths of our humanity including the parts that we avoid, drawing people into a community governed by grace, connected by their faith in Christ. In my experience this community has greatly enriched my understanding of human life and afforded me a platform to discuss it further. But even here, I find myself becoming increasingly disturbed by the shallow, distracted interaction with our world, thought and significant literature.

« Song of the Month: I Have a Shelter Prince Caspian: Conflicting Stories »
comments powered by Disqus