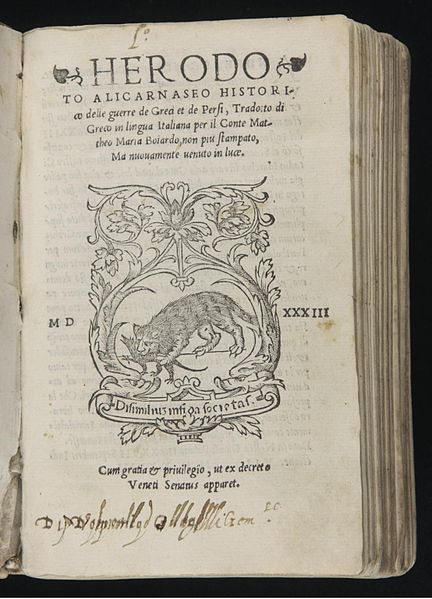 Imagine a Sunday morning at your local church. The band are leaving the stage while the reader makes her way up to the pulpit. She reaches the microphone and announces the passage, “This morning’s reading will be from Herodotus’ The Histories, 7:220-221.” After a brief pause, she says again, “The reading will be from Histories, book 7, verses 220 through to the end of 221.”

Yes, I know it’s hard to imagine the reading being so clearly prefaced, but this is a hypothetical situation. The reader continues, “You can find that on page 492 of our provided Herodotus, the 2003 Penguin edition.” After the passage is read your reader reminds the congregation, “This is the Word of God,” to which the congregation loudly respond, “Thanks be to God.” Then your pastor gets up, thanks the reader and begins, “Good morning Redeemer Church Muizenberg, today we will be continuing with our series in The Histories.” He introduces the three points from the passage just read:

Unpacking these points from the text over the next 40 minutes, the pastor delivers a moving sermon on how the Christian must not give up, but keep striving forward. For we can know – as Leonidas did – that eternal glory and immortality is promised for those who persevere. Finally, all of this was achieved and secured for us by his prophesied death, which he went to willingly to save us. The problem that I hope you have with all of the above is that The Histories is not in the Bible. Sure, it might make for a great sermon. If I’m honest, I’m pretty pleased with my three points. Furthermore, if we ignore Leonidas, the sermon would be consistent with biblical truth. You could make all of those points from biblical texts. For all of these reasons, and a few more I will outline below, I think Herodotus’ Histories is a good analogy for why we should not preach John 7:53-8:11.

In a previous post on John 7:53-8:11, with the assistance of what is considered the best commentary on John’s Gospel ever written, I probed some of the concerns regarding this text’s authenticity and its inclusion in John. The first significant problem that must be faced is that the short narrative is found in a variety of textual locations, in both John and Luke. This raises serious questions over its reliability and Johannine pedigree. If we put that aside, because it does actually appear after John 7 more than anywhere else, we must answer another serious concern: the literary shape and argument of John 7 through John 8. In both chapters Jesus is involved in heated conversations with those who rejected his messianic claims, particularly the Pharisees. These two chapters of John are remarkably polemical, creating a quite unique unit within John’s Gospel. This makes the story about the woman caught in adultery awkwardly out of place—a misfit. Added to this, and here we must defer to Greek scholars, in just 12 verses we encounter a handful of constructions and expressions found nowhere else in John. To explore these arguments in more detail see my linked post (above).

When all of the above is considered, there is still no consensus about whether this story is part of John or Luke. The evidence we have is inconclusive. Despite the growing agreement that this passage is actually native to Luke’s Gospel, based on its literary nature, the weight of documentary evidence still places it in John. This uncertainty is not inconsequential, especially for expository preaching that places a high value on literary context. Michael Gorman writes in Elements of Biblical Exegesis, “Context is so crucial to interpretation that it is no exaggeration whatsoever to say that if you alter the context of a word or sentence or paragraph, you also alter the content of that text.” Therefore where we place this short episode shapes how it should be read and understood. The insurmountable problem is we are not even sure it is currently in the correct Gospel.

Perhaps you can put these issues aside. Maybe you are hanging onto the fact that John 7:53-8:11 is historical. After all, significant and reputable New Testament scholars believe the evidence we have indicates that John 7:53-8:11 really took place. It bears the marks of an authentic historical event. The problem is, the church does not gather to hear about history but from God. Mentions of Jesus of Nazareth can be found in Josephus, Suetonius, Pliny the Younger and Tacitus, all of whom wrote towards the end of the 1st century CE, which is likely the dating for John. But we don’t preach sermons from those texts. I’ve heard the argument that, in addition to being historical, John 7:53-8:11 resonates with so much of Jesus’ teaching. But then so does Seneca the Roman philosopher and statesman. Historical pedigree is not the mark or measure of canonicity.

Should we preach John 7:53-8:11? No. You would not read the authors mentioned above and exegete their writings as Scripture, as God’s Word to his people. Despite liking the outline, I would not preach my three point sermon from Herodotus’ Histories. Similarly, which has been the contention of this post, we should not treat or handle John 7:53-8:11 as Scripture—this is not because of questions over its credibility but rather its canonicity.

« Doodle: Abortion and an Unborn Baby Rhino The Last Battle: To Live is Christ »
comments powered by Disqus