Reclaiming a Place for Prophecy in Church Gatherings 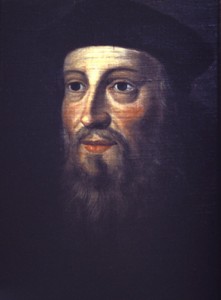 I am an Anglican, mostly by theological training and partly by conviction. Thus I am convinced to varying degrees about issues such as local church government, paedobaptism, and denominational structure. I gladly, along with other denominations, see my Anglican roots in the Reformation historically. With much credit to Ashley Null, I am enamoured with the English Reformer, Thomas Cranmer and his legacy, our Anglican liturgy. However, this brings me to the Thirty-nine Articles and an aspect of my experience in the Anglican Church, which has left me dissatisfied, and that I am sure is shared by many: the lack of spontaneity and mutual encouragement in our corporate gatherings. Though there are no doubt many excellent reasons for formally structured services (though see Spurgeon’s warning against predictable services), I wonder if the 23rd article is not partially responsible for my frustration, ‘No man is permitted to take upon himself the office of public preaching before he has been appointed to fulfil his office. They must be selected and called.’ Obviously this is referring to the public ministry of preaching, but the article is titled, “Ministering in the congregation,” which in most Anglican churches is done by the trained few rather than the priesthood of all believers.

What brought this issue to a head in my own thinking was reading David Peterson, an Anglican of Anglicans. In his invaluable book, Engaging with God, he provides a biblical approach to worship, calling Christians everywhere to measure their view of worship alongside the touchstone of Scripture; worship, when understood correctly, is the meeting with God made possible through faith in the gospel, the revelation of God in Jesus Christ, and the ministry of the Holy Spirit. After establishing a biblically faithful definition of worship, Peterson unpacks its relevance for the corporate gatherings of local churches. One of the most challenging segues for me personally, and to my Anglican tradition, is his treatment of 1 Corinthians 14. We are familiar with this passage because it is where Paul criticises tongues, but how often do we reflect on what Paul favours in its place, namely, prophecy? In answering that below question I will rely heavily on David Peterson and 1 Corinthians 14, and lightly on John Frame’s Worship in Spirit and Truth. 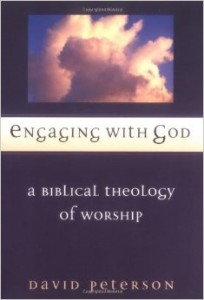 Peterson writes, “1 Corinthians 14 challenges the tendency of many Christian traditions to undervalue spontaneity and variety of input in the congregational gathering. Paul expected that members of the congregation to come with some contribution prepared for the occasion or that individuals might be prompted by the Spirit to offer prayer or praise or some other ministry on the spot.” We balk at that application, especially that last bit about the Spirit’s prompting, though it is hard to deny considering prophesy may disclose the secrets of a hearer’s heart (1 Corinthians 14:25). Peterson is not suggesting free for all corporate worship, after all that is what Paul was writing against, and he recalls the New Testament’s weighting and emphasis on pastor-teachers doing the primary work of equipping and leading (Ephesians 4:11-14). But, “There should be some public opportunity for spontaneous and informal ministries.” Peterson adds that other passages, such as 1 Thessalonians 4:18; 5:11, 14 and Ephesians 4:15, confirm the value unplanned verbal ministries of exhortation, comfort or admonition by the congregation. Reading the New Testament we are confronted at many points by what John Frame calls “participative worship” and I agree with Frame that this cannot be claimed to take place solely in the scripted and restricting liturgy of congregational prayers and responses. Careful thinking needs to be done in creating a place for encouraging prophecy in public church gatherings. But before that is done three important qualifications must be offered.

(i) Intelligibility
Above I have, with the help of Peterson, identified what John Frame calls a relatively democratic structure for worship. Fundamental to Worship in Spirit and Truth is Scripture’s explicit emphasis on the intelligibility of corporate worship. It was the unintelligibility of worship at Corinth that Paul sternly addresses – “If with your tongue you utter speech that is not intelligible, how will you anyone know what is said?” (14:9), and, “In church I would rather speak five words with my mind in order to instruct others, than ten thousand words in a tongue” (14:19), “But if all prophesy, and an unbeliever or outsider enters, he is convicted by all, he is called to account” (14:24). That last verse cited impresses on us that even non-Christians should find worship understandable and sensible. This must be kept in mind as we seek to incorporate prophecy into our gatherings. Hear Paul, as he moves towards concluding this section of his letter, “God is not a God of confusion but of peace” (14:33). 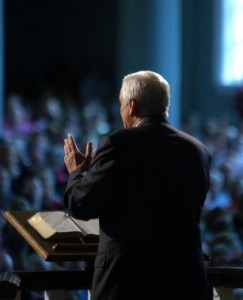 Secondly, we need to retain the balance of the New Testament, which I have already mentioned. Peterson rightly says that the natural environment for prophecy is in home groups, personal interaction after or before services and in meeting informally to pray or read together. But he then inquires, considering 1 Corinthians 14 and other passages cited, why we view the spontaneous prophecy for edification, encouragement and comfort with such suspicion when it comes to our public gatherings (14:3). Answering his own question Peterson says we cannot claim to hold to the New Testament’s balance without allowing at least some space for informal contributions to be made. How this is to be done is not developed in any sort of detail in the New Testament though Peterson suggests, “It may be a matter of finding appropriate spots in the regular pattern of Sunday services where contributions can be made…rearranging the furniture or encouraging people to gather together differently so that those who contribute can be more easily seen and heard.” However we do it, it should be done. And we must not forget that the public reading and teaching of Scripture remains the organising centre of corporate worship.

(iii) Prophets versus prophecy
Finally, Peterson calls for clear distinction between the prophets of the Old Testament and prophetic ministry carried out by certain Christians (see Romans 12:6; 1 Thessalonians 5:19-22; 1 Peter 4:11). Unlike the former, prophetic ministry requires evaluation (1 Corinthians 14:29), indicating that it can be challenged and even rejected. Prophecy of the sort we are investigating does not share the apostolic commission given by Jesus to provide the church with authoritative revelation (John 16:12-15), which became our New Testament (John 17:20; 20:30-31). The prophetic ministry of the New Testament should not be confused with Old Testament prophets, who addressed Israel with Yahweh’s very words; instead it functions to strengthen, encourage and comfort those in the local church (1 Corinthians 14:3). Prophecy is also to be instructive, “that all may learn” (14:31). Thus prophetic ministry possesses a limited authority while pursuing the application of the gospel to the lives of other believers.

In encouraging our congregations to explore the gift of prophecy in the life of the local church we must insist on maintaining intelligibility, in order to keep us from becoming clanging symbols; retaining the biblical balance of preaching and the public reading of Scripture to lead local gatherings; and asserting the authority which God has preserved for us in both Testaments over any claim to speak on behalf of God today.

I started this post lamenting the Anglican tradition’s fear of involving the congregation in public worship. As I close let me say that I do not think our liturgy should bear the sole responsibility. Both Frame and Peterson identify a deeper problem than traditions and liturgy: the passive attitude most Christians adopt towards corporate gatherings. Frame believes this is a result of our entertainment driven culture. Peterson, on the other hand, suggests that too many Christians have the narrow understanding of church services as facilitating private communion with God. Both of these grossly inadequate approaches to church services express a failure to properly consider the horizontal dimension of worship. Frame reminds us, “We should go to church to do something: to bring praise to God and to minister to one another.” It is tragic misunderstanding of church to be most concerned with what I can get out rather than how I might contribute to others. I will allow David Peterson the last word, “Paul would urge us to meet in dependency on one another as vehicles of God’s grace and to view the well-being and strengthening of the whole church as the primary aim of the gathering. There ought to be a real engagement with other believers in the context of mutual ministry, shared prayer and praise, not simply a friendly chat over a cup of coffee after church!”

« Doodle: Hellenism, Ethics, and Old Testament Eschatology Why the Rainbow Nation is Good for the Gospel »
comments powered by Disqus