Why the Rainbow Nation is Good for the Gospel 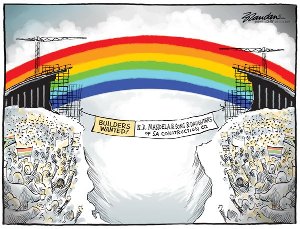 There are plenty of things that can be said in favour of our Rainbow Nation here in South Africa and I don't think what you are about to read is even most poignant. What I would like to focus on does, however, cut to the heart of the sacred/secular divide that Western culture seems bent on inflicting on our societies.

Let's consider, for a moment, the intent behind calling ourselves a "Rainbow Nation". Desmond Tutu is credited with the term which "intended to encapsulate the unity of multi-culturalism and the coming-together of people of many different nations, in a country once identified with the strict division of white and black" (thanks wikipedia).

The significance is partly in what it does not mean: we are not a group of people that come together and lose our diversity and multi-culturalism. When I had the misfortune of attempting to mix paints, irrespective of my objective, I somehow always managed to produce an unusable colour I affectionately remember as "vomit brown". This kind of mix into a homogenous mass is not what it means to be a rainbow nation. We retain our colours, cultures and creeds and we find a way to live with all those in harmony. 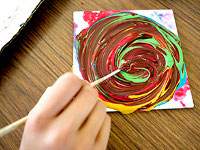 In America, diversity becomes vomit brown - everyone wants in on the American dream and so the diversity that once existed is slowly eroded as everyone succumbs to the demands of the dream or is crushed under its weight. It shouldn't come as a surprise that America wants a secular public sphere - what better way to harmonise our differences than deny them and pretend none of us have any convictions at all?

In an article I read recently Richard Neuhaus is remembered as "almost single-handedly" challenging that idea - the idea to reduce "religious belief to private worship". In essence he argued,

Separation of church and state could never mean the separation of religion from public life. The most deeply held beliefs and values of American citizens could not and should not be quarantined from the life of the contemporary polis.

That sounds great but in America it has been far from successful. The lack of success is because diversity in America means anyone can come but you have to conform. In South Africa, however, when secularism raises its vomit-brown head, we can cry "rainbow nation" - a term that means my Christianity is an essential part of my identity and not something I will cover up when in public like some embarassing tattoo. 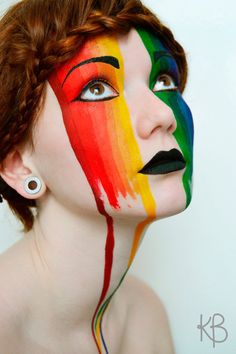 The "Rainbow Nation" means we have to learn to live with each other - a potentially perilous task - but it also means that my convictions don't have to be swallowed up into the amorphous mass of cultural uncertainty; they are colour in the rainbow. More importantly, rather than being a mere band of colour passively reflecting the light thrown onto us, Christians wearing their Christianity in public are themselves light in a dark world. This Rainbow Nation opens the door to light, hopefully as Christians we will not forego the opportunity to shine.