How the Early Church Proves the Resurrection

In her most recent novel, Lila, Marilynne Robinson draws back the curtain on a character who, though present in her previous two novels, Gilead and Home, has remained fairly mysterious. She is the young wife of John Ames and Lila recounts her austere life as a migrant worker, dominated by loneliness and loss. But one day Lila finds herself in a church service, when she was only looking for shelter from the rain, “She was thinking how strange it was for them to be there singing songs to somebody who had lived and died like anybody.” Very few historians would dispute that there was a historical man named Jesus, who was remarkable at most but died nonetheless. And this means Lila’s bemusement is more than bare wonder, but a question we must all answer: how do we explain two millennia of singing? 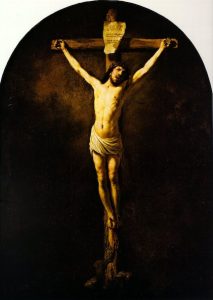 Firstly, because without it the resurrection makes little sense, we must look at the death of Jesus. “Crucifixion,” David Seccombe writes, “was designed to inflict as much pain as possible for as long as possible, in a manner that brought about the complete public humiliation of the victim…This was Rome’s way of exposing the foolishness of anyone with political pretensions. There was no honour or heroism in such a death” (The King of God’s Kingdom). For Jesus’ disciples, his death signalled a miserable failure and a familiar pattern. Jewish messiahs would gather devoted followings, appealing to the oppressed people with promises of God’s powerful liberation. None succeeded. Jesus fits this category: supposed Jewish messiah executed by the Romans. In dying Jesus was painfully ordinary, even predictable. He was not exceptionable and arguably not even the most popular messiah of his day. This was what happened. And, in addition to the Jewish people’s familiarity with disappointment, they did not expect their messiah to die and be resurrected (a point very well made by N. T. Wright). Therefore, historically, the Jesus story is very similar to the lesser-known stories about other failed Jewish messiahs. Strangely, Jesus’ story is remembered.

That brings us to our next point, the quite incredible historical reconstruction put forward by sceptics. This popular explanation of the resurrection requires, in my opinion, a greater suspension of logic than the kind Christians are often accused of. For it says that a bunch of despondent and utterly disappointed followers, whose messiah was recently put to death, went about proclaiming his resurrection. Their teacher had just been horrendously executed and before that, as he was being arrested and tried, they were climbing over each other to dissociate themselves from him. Jesus was dead, going the way of every other messiah. So they decided to proclaim that he had been resurrected. Even though it had not happened. Indeed, no one expected it to, probably not even Jesus’ disciples. But in the midst of overwhelming disappointment and guaranteed ridicule as well persecution for proclaiming it, they go about preaching Christ’s resurrection. Again, the sceptic must face up to the difficulty that logic presents. What could possibly propel the disciples into the Empire that had recently killed their messiah, declaring that he was alive?

Former Archbishop of Canterbury Rowan Williams proposes the incredible but altogether logical explanation, “Jesus appeared to people whose confidence in him had crumbled, not to believers. It was the resurrection that created the Church and its faith, not the Church that created the resurrection.” He makes two points: the first has been lightly touched on already, we might paraphrase Williams in saying that Jesus appeared to sceptics. In the final chapter of Luke’s Gospel we encounter two former followers of Jesus, pouring out their heavy hearts in the wake of Jesus’ apparent failure, “We had hoped that he was the one to redeem Israel.” Now whether you consider the Gospels historically reliable or not, it is safe to assume that those two men accurately illustrate how Jesus’ disciples would have felt after his death. As Williams correctly says, their confidence in him was shattered and he would be assigned a place with all the other failed messiahs. But that did not happen, as Williams’ second point suggests; a new faith was born, which is hard to account for apart from Jesus’ resurrection. Their faith, their eschatological hope and longing for liberation, did not anticipate the resurrection of a single man. The resurrection created the church, for their fractured faith would not have created a resurrection.

A resurrection shaped hole in history

That unpopular, though logically credible, and in my opinion more probable, explanation answers the question we started with, the strange fact that people are still singing songs to Jesus. The answer goes beyond curiosity, to ask us what we make of Jesus, his resurrection, and the early church. American pastor Timothy Keller comments in The Reason for God that the first Christians knew that if the resurrection was true then they could no longer live their lives however they wanted to. He goes on, “If it happened, it changes our lives completely.” What will you do? How else do you suggest to expain the faith of the early church? Let me close with the now famous lines from C. F. D. Moule, in The Phenomenon of the New Testament, 'If the coming into existence of the Nazarenes rips a great hole in history, a hole the size of the and shape of the Resurrection, what does the secular historian propose to stop it up with?'