Good Friday: The Cry of Dereliction

The day had turned to dark, long before the sun set, as Jesus Christ hung on the cross. His enduring faith in his Father in heaven had brought him to this end; obedience to his Father had culminated in the cross. But as he struggled to take his last few breathes, while his arms grew too tired to relieve the pressure on his chest, and the darkness enveloped and gripped him tightly he cried out: “My God, my God, why have you forsaken me?” (Matthew 27:46; Mark 15:34). What are we to make of these final excruciating words? Michael Wilkins calls them “some of the most profoundly mysterious words in the entire Bible.” Derek Tidball writes that they uncover the awfulness of Calvary, which we prefer to forget. Alister McGrath goes further, arguing that Jesus’ cry shatters the moulds of our thinking and reveals the fundamental uncontrollability of God. The cross presents us with an unnerving and mysterious question: in what sense does God the Father forsake his Son at the cross?

“If it is possible, let his cup pass from me” 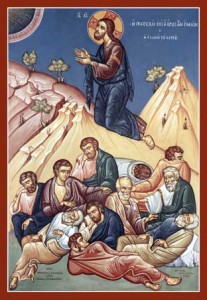 Before attempting an answer, let us start with Jesus’ familiar, though often domesticated, prayer in Gethsemane; when the man of sorrows, despised and rejected, well acquianted with grief who had experienced the many hurts and hardships of human life balked at Calvary (Matthew 26:39). The prospect of the cross brought Jesus into tormented fear and dread. In his short life he had known suffering but his agonised prayer suggests a greater significance and uniqueness of what loomed ahead. Before he was stretched out on that cruel tree, Jesus could say, “I am not alone, the Father is with me” (John 16:32). And throughout his fraught life Jesus would have enjoyed assuring fellowship with the Father. But Jesus’ pleas and prayers in Gethsemane force us to ponder what Jesus was to endure. We must conclude that it was not merely physical suffering that Jesus feared, but the death that he was to die.

In addition to the above, to answer our question we must consider Jesus’ use of Psalm 22. Some have called it total despair or claimed that Jesus is utterly disorientated, even confused about why he was dying. But when we consider the content of the Psalm, we can say that the cry is not entirely desparing because the psalmist anticipated divine intervention. Furthermore, Jesus was aware that he was dying for sins. In fact, something that is often glanced over, the Psalm expresses faith in Yahweh to vindicate. Even though Jesus’ suffering threw him into the darkest of places, he trusted his Father to the bitter end. Significantly, Psalm 22 moves from lament and despair, to prayer, and climaxes in Yahweh being entroned over the nations. Jesus’ faith was unremitting as he cried out to his Father, whom he knew would establish his kingdom, even when it seemed the gates of hell were prevailing against it. Jesus knew his death would not be the end of his story. So onlookers at his crucifixion, familiar with the Psalter, would have heard an affirmation of Jesus’ faith, clinging with certain hope to the will of his Father.

Was the Son truly forsaken or the Father fully absent?

As Jesus hung dying, being publically mocked and humiliated, it appears that God is absent from Golgotha. As Wayne Grudem comments, Jesus’ sweet fellowship with the Father, his source of unfailing strength and the element of greatest joy in a life full of sorrow, appears dashed. But as Alister McGrath writes, instead of understanding Jesus’ God-forsakeness as total privation we should see God’s presence in the most remarkably paradoxical way. Martin Luther called this the hiddeness of God at Calvary. As the sky is literally tarred, figurative darkness descends on the Son and God’s familiar protective presence and love was withdrawn from Jesus. In biblical symbolism, darkness is separation from God who is light. Jesus’ experience extends beyond deep spiritual darkness to enduring God’s wrath. Darkness is stressed by each Gospel writer, emphasising that God had not only turned away from the Son and their close communion but towards his Son in judging sin. Alone Jesus hangs, being made sin and fully identified with sinful humanity. And it this – the penalty of sin, not the Roman punishment – that weighed most heavily on the suffering servant. Calvin wrote that it was Jesus’ soul that bore the worst torment, the terror of God’s condemnation. As John Stott said, Jesus was plunged into that engulfing darkness for us; our sins blotted out the sunshine of the Father’s face.

When we ask in what sense the Father turned his face away from the Son on the cross we must agree with the authors of Pierced for Our Transgressions that the language of ‘abandonment’ or ‘forsakenness’ is a metaphorical way of referring to divine judgment. But it is not that simple, as we have seen, for the God who abandons his Son is fully present at the cross resolving the problem of sin. This great paradox prevents us from giving a glib answer to our question. Luther viewed the cross as a great mystery. Calvary should both humble and move us to adoration; while we cannot fully explain the enigma of Jesus’ cross or even grasp the anguished horror, suffering and abandonment that Jesus went through, let us not forget that he endured it on our behalf, so that we do not have to. If we understand none of the cross and Christ’s experience, praise God that it will never be ours.