The Ghost, the Lizard, and the Angel

I saw coming towards us a Ghost who carried something on his shoulder. Like all the Ghosts, he was unsubstantial, but they differed from one another as smokes differ. Some had been whitish; this one was dark and oily. What sat on his shoulder was a little red lizard, and it was twitching its tail like a whip and whispering things in his ear. As we caught sight of him he turned his head to the reptile with a snarl of impatience. "Shut up, I tell you!" he said. It wagged its tail and continued to whisper to him. He ceased snarling, and presently began to smile. Then he turned and started to limp westward, away from the mountains.

The speaker was more or less human in shape but larger than a man, and so bright that I could hardly look at him. His presence smote on my eyes and on my body too (for there was heat coming from him as well as light) like the morning sun at the beginning of a tyrannous summer day.

"Yes. I'm off," said the Ghost. "Thanks for all your hospitality. But it's no good, you see. I told this little chap," (here he indicated the lizard), "that he'd have to be quiet if he came which he insisted on doing. Of course his stuff won't do here: I realize that. But he won't stop. I shall just have to go home." 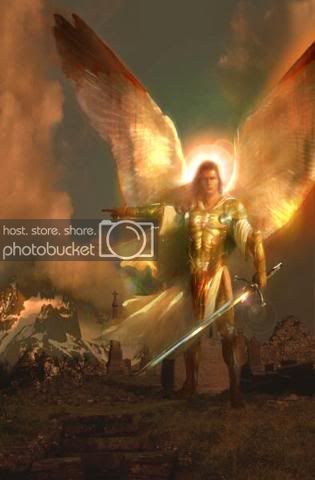 "Would you like me to make him quiet?" said the flaming Spirit---an angel, as I now understood.

"Of course I would," said the Ghost.

"Then I will kill him," said the Angel, taking a step forward.

"Don't you want him killed?"

"You didn't say anything about killing him at first. I hardly meant to bother you with anything so drastic as that."

"It's the only way," said the Angel whose burning hands were now very close to the lizard. "Shall I kill it?"

"Well, that's a further question. I'm quite open to consider it, but it's a new point, isn't it? I mean, for the moment I was only thinking about silencing it because up here---well, it's so damned embarrassing."

"Please, I never meant to be such a nuisance. Please---really---don't bother. Look! It's gone to sleep of its own accord. I'm sure it'll be all right now. Thanks ever so much."

"Honestly, I don't think there's the slightest necessity for that. I'm sure I shall be able to keep it in order now. I think the gradual process would be far better than killing it."

"The gradual process is of no use at all."

"Don't you think so? Well, I'll think over what you've said very carefully. I honestly will. In fact I'd let you kill it now, but as a matter of fact I'm not feeling frightfully well today. It would be silly to do it now. I'd need to be in good health for the operation. Some other day, perhaps."

"There is no other day. All days are present now."

"Get back! You're burning me. How can I tell you to kill it? You'd kill me if you did."

"I never said I wouldn't hurt you. I said it wouldn't kill you."

"Oh, I know. You think I'm a coward. But it isn't that. Really it isn't. I say! Let me run back by tonight's bus and get an opinion from my own doctor. I'll come again the first moment I can."

"This moment contains all moments."

"Why are you torturing me? You are jeering at me. How can I let you tear me to pieces? If you wanted to help me, why didn't you kill the damned thing without asking me before I knew? It would be all over by now if you had."

"I cannot kill it against your will. It is impossible. Have I your permission?"

The Angel's hands were almost closed on the Lizard, but not quite. Then the Lizard began chattering to the Ghost so loud that even I could hear what it was saying.

"Be careful," it said. "He can do what he says. He can kill me. One fatal word from you and he will! Then you'll be without me for ever and ever. It's not natural. How could you live? You'd be only a sort of ghost, not a real man as you are now. He doesn't understand. He's only a cold, bloodless abstract thing. It may be natural for him, but it isn't for us. Yes, yes. I know there are no real pleasures now, only dreams. But aren't they better than nothing? And I'll be so good. I admit I've sometimes gone too far in the past, but I promise I won't do it again. I'll give you nothing but really nice dreams all sweet and fresh and almost innocent. You might say, quite innocent...."

"Have I your permission?" said the Angel to the Ghost.

"You're right. It would be better to be dead than to live with this creature."

"Damn and blast you! Go on can't you? Get it over. Do what you like," bellowed the Ghost: but ended, whimpering, "God help me. God help me."

Next moment the Ghost gave a scream of agony such as I never heard on Earth. The Burning One closed his crimson grip on the reptile: twisted it, while it bit and writhed, and then flung it, broken backed, on the turf.

"Ow! That's done for me," gasped the Ghost, reeling backwards.

For a moment I could make out nothing distinctly. Then I saw, between me and the nearest bush, unmistakably solid but growing every moment solider, the upper arm and the shoulder of a man. Then, brighter still and stronger, the legs and hands. The neck and golden head materialised while I watched, and if my attention had not wavered I should have seen the actual completing of a man---an immense man, naked, not much smaller than the Angel. What distracted me was the fact that at the same moment something seemed to be happening to the Lizard. At first I thought the operation had failed. So far from dying, the creature was still struggling and even growing bigger as it struggled. And as it grew it changed. Its hinder parts grew rounder. The tail still flickering, became a tail of hair that flickered between huge and glossy buttocks. Suddenly I started back, rubbing my eyes. What stood before me was the greatest stallion I have ever seen, silvery white but with mane and tail of gold. It was smooth and shining, rippled with swells of flesh and muscle, whinnying and stamping with its hoofs. At each stamp the land shook and the trees dindled.

The new-made man turned and clapped the new horse's neck. It nosed his bright body. Horse and master breathed each into the other's nostrils. The man turned from it, flung himself at the feet of the Burning One, and embraced them. When he rose I thought his face shone with tears, but it may have been only the liquid love and brightness (one cannot distinguish them in that country) which flowed from him. I had not long to think about it. In joyous haste the young man leaped upon the horse's back. Turning in his seat he waved a farewell, then nudged the stallion with his heels. They were off before I even knew what was happening. There was riding if you like! I came out as quickly as I could from among the bushes to follow them with my eyes; but already they were only like a shooting star far off on the green plain, and soon among the foothills of the mountains. Then, still like a star, I saw them winding up, scaling what seemed impossible steeps, and quicker every moment, till near the dim brow of the landscape, so high that I must strain my neck to see there they vanished, bright themselves, into the rose-brightness of that everlasting morning.

« How do African concepts of God relate to the God of the Bible? Postmillennialism vs Premillennialism »
comments powered by Disqus