How do African concepts of God relate to the God of the Bible? 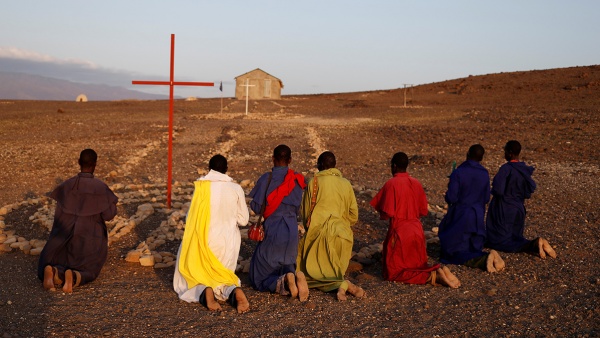 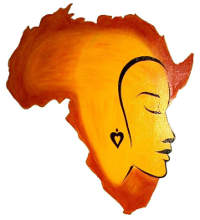 A.W. Tozer (1994:11) famously suggests that “What comes into our minds when we think about God is the most important thing about us”. I believe this assertion to be correct and so the question, “How do African concepts of God relate to the God of the Bible?” is most worthy of our consideration. In attempting to answer this question we will examine their similarities and differences, and then we will consider whether African concepts of God¹ are more similar or dissimilar to the God of the Bible.

At the outset I need to say that one of the major problems in a study such as this is its vastness. Attempting to distill the religious beliefs of about 1 billion people is no small task; especially when these people are at no point static in their beliefs. Thus, in this essay, the only plausible approach is to consider the views which hold a majority.

1. The Similarities Between the God of the Bible and the Supreme Being.

The most significant similarity between the African God and the Biblical God is the fundamental belief in a deity. Atheistic tendencies in Africa are minimal. O’Donovan (1995: 41) goes as far as suggesting that “there is probably no native-born African who is not aware of the existence of God”.

In addition to the belief in deity, the Supreme Being of Africa largely overlaps conceptually with the identity and work of the biblical God. The Supreme Being is personal in the sense of possessing personhood; therefore deity is referred to as a ‘He’ and not as an ‘it’ or a ‘power’ (Gehman, 2005: 319). This personhood is not seen to be manifested physically, but to exist spiritually. Thus, Gehman (2005: 316) succinctly states that, “God has no body; he is invisible”. 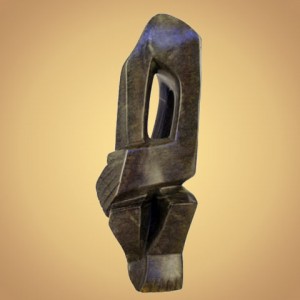 The Supreme Being is furthermore perceived as being the creator of the world. Thus everything in the spiritual, and the physical, world is the way it is today as a direct result of his action² (Kato, 1975: 31). Moreover, the Supreme Being sustains this world; that in the sense that he keeps everything which he made in existence at every given moment, and in the sense that he is seen to be the one who provides and protects this world³ (Mbiti, 1991: 49, 52).

The Supreme Being is likewise good (Mbiti, 1991: 55). By this Africans understand that God is not only kind, but that he does not do wrong. In contemplating this point Gehman (2005: 320) helpfully states, “Whatever tragedy is experienced is blamed on witchcraft or the living-dead. God is seldom charged with wrong doing in Africa”.

I have opted to not include the concept of transcendence under similarities for I believe it to be an area where African theologians have fundamentally misrepresented African religion, by “‘baptising’ the data in order to project a traditional religion that is compatible with Christianity” (Bowers, 2002: 118). It seems that we need to heed Turaki’s (1999: 149-150) warning to not violate Africa’s holistic view of the world by interpreting the Supreme Being’s transcendence in absolute terms. Rather, it seems that there is less of a chasm between God and the other spirit beings, and that the category used to understand the remoteness of the Supreme Being is not transcendence but differing communal responsibilities (Turaki, 1999: 156).

It is clear that there is much in common between the biblical view of God and the African concept of the Supreme Being. These similarities extend over both the character and the work of each deity. So the question needs to be posed, “Are there any differences between the God of the Bible and the gods of Africa? If so, what are they?”

2. The Differences Between the God of the Bible and the Supreme Being.

There are two major differences between the God of the Bible and the African concepts of God, which I will discuss. I have opted to include fewer differences not because there are not many, but because more explanation is required. 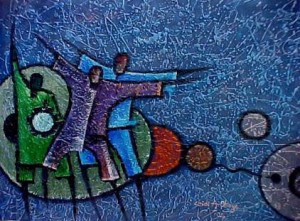 Firstly, the God of the Bible is different to the African gods in that he is knowable and relational. The problem with the African concepts of God is that they go no further than speculation. Indeed, they can go no further because, although humans can pray to the Supreme Being in certain situations (O’Donovan, 1995: 42), he never interacts with, or personally reveals himself to, the people of Africa (Turaki, 1999: 160). By this I am not suggesting that God has not revealed himself through what is commonly referred to as ‘general revelation’⁴. I am suggesting, however, that verbal communication and personal relationship with the Supreme Being are not a reality for the African. Thus, in this area, we observe a stark contrast between the biblical God and the Supreme Being. Since the beginning of time the biblical God has revealed himself through communicating verbally with human beings; in fact, he has done so finally through Jesus Christ (Hebrews 1:1-4). In this communication he has told people what he is like and he has offered them the possibility of relationship. Thus, the God of the Bible is different to the Supreme Being of Africa in that he is knowable and relational.

Secondly, the God of the Bible is holy and just. Sin in the African worldview is against the community and not against God⁵ (Kato, 1975: 42). As a result, it is the community who is most offended, by these social ills, and it is they who take the responsibility to discipline the offender. Nyirongo (1997: 63) helpfully adds, “The responsibility belongs to those who are physically alive, but more especially to the ancestral spirits who are the custodians of the community”. Therefore we clearly see that it is not the Supreme Being who is offended by these social ills. Yet the Bible cannot conceive of the One True God like that. The biblical God says that sin is against him personally (Psalm 51:4), and causes him great offense (Hosea 9:15). Indeed, God promises that he is judging sin now (Romans 1:24) and will do so in a more comprehensive way in the future (2 Peter 3:7). Thus, in contrast to the humanistic view of sin in the African tradition, the God of the Bible is seen to be holy and just.

In light of the two points above, there do seem to be major differences between the African conception of the Supreme Being and the Christian conception of God. Yet, there are significant similarities at the same time. How, then, are we to think about the Supreme Being as Christians? Is their continuity or discontinuity greater, or more significant? Is the African concept of God an effective praeparateo evangelica for African Christianity? These are vital questions which we shall now consider.

3. Are The Similarities Or The Differences More Significant?

In reflecting on the world without God’s word, Romans 1:21 says that “although [people] knew God, they neither glorified him as God nor gave thanks to him, but their thinking became futile and their foolish hearts were darkened”. 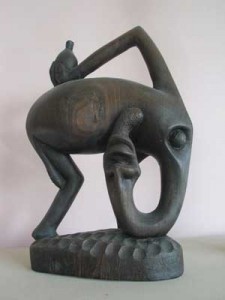 From this verse two things are evident. Firstly, Africans do know something about God. Indeed, we must affirm that the Bible is correct when it asserts that God’s divinity and power have been plain since the creation of the world (Romans 1:19-20). Furthermore, due to the nature of the evidence, its scope must be universal; and so we cannot exclude Africans from this knowledge. God has not left himself without a witness in Africa; no, he has clearly spoken through what has been made. Therefore, we must affirm what is correct in the African conception of deity.

Secondly, Africans have distorted their knowledge of God. Although there is much in the Supreme Being which corresponds with the biblical conception of deity, Romans 1:21 argues that this knowledge has been illegitimately expanded and perverted. Therefore, Africa has effectively made its own God. Byang Kato (1985: 32) states this point with great clarity when he says, “Whatever rationalization we may try to make, the worship of gods in Africa is idolatry”⁶. Thus, at the point where revelation from the deity becomes re-creation into a new deity, it becomes impossible to see the biblical God as a continuity of the African God⁷ (Turaki, 1999: 160).

In light of the above it seems that we should affirm the similarities between the biblical God and the African God. These similarities are seen in the belief in the existence of a personal and spiritual deity who is the almighty creator, and the all-knowing, protecting provider. Moreover, he is good, eternal and omnipresent.

Yet, at the same time it must always be maintained that this is fundamentally a different God due to Africa’s distortion of general revelation. Examples of where this difference is manifested are, amongst others, holiness, justice, knowledge and relationship. Yet, these are surface cracks which reveal to us the much greater underlying problem of idolatry. As Christians we must believe that if Africa is to have any hope in God her God must be the God of the Bible. Therefore, we need to be aware of this idolatry and proclaim with great boldness the God of the Bible throughout Africa.

¹ Discussions about ancestors, dynamism and spiritism are important but unfortunately fall outside the scope of this essay. Return to essay

² There is some argument about whether the Supreme Being created ex nihilo or merely organised some type of existing matter. Obviously you will find tribes subscribing to both sides of this argument. Either way, however, the world as we see it today is a direct result of the activities of the Supreme Being and so it is legitimate to say that he created this world. Return to essay

³ However, the dual activities of providing and protecting are not undertaken directly by the Supreme Being. Rather, the Supreme Being commissions other beings in the spiritual hierarchy to undertake these tasks. Return to essay

⁴ In fact, Nyirongo (1997: 16) states, “That God revealed Himself to the pre-Christian African generations cannot be denied. Also that he continues to speak to all the tribes of Africa who have not heard the Gospel can also not be denied”. By this he is asserting that God has revealed himself in a general way through what has been created and in that sense he has spoken and continues to speak to every African. Return to essay

⁵ It is worth noting that most conceive sin to be originally against the Supreme Being, and that is what plunged the world into its current state (Nyirongo, 1997: 61). Return to essay

⁶ It is worth quoting Nyirongo (1997: 16) on this point at length: “That God revealed Himself to the pre-Christian African generations cannot be denied. Also that he continues to speak to all the tribes of Africa who have not heard the Gospel can also not be denied. ...The problem is not that God did not speak clearly to the African in the past: the problem is rather what the African did with the revelation he received from God. Instead of positively responding to it in faith, he resorted to idols”. Return to essay

⁷ It is worth bearing this in mind when examining Mbiti’s (1980) statement, “When we identify the God of the Bible as the same God who is known through African religion ... we must also take it that God has had a historical relationship with African peoples. ... Their history has a theological meaning. ... In this case, so-called "salvation history" must widen its outreach in order to embrace the horizons of other peoples’ histories”. Notice that his argument is built on a fundamental continuity between the biblical God and the African God, and thus it is basically flawed. Return to essay

« Worth Hearing: Showbread - Matthias Replaces Judas The Ghost, the Lizard, and the Angel »
comments powered by Disqus