Few Christian doctrines are more vehemently scorned than exclusivity. Not only does it presuppose that large swathes of people are, and have been, very wrong about who God is, but the intolerance dogmatic beliefs engender damages any hope of establishing peace on earth. I will risk losing your readership at this point by saying that I agree with these two statements: many people are wrong about whom God is and the existence of religion prevents peace on earth. As a Christian, however, I believe in exclusivity because I am convinced that there is one God, who has made himself known in the person of Jesus Christ, see my post on cause versus revelation. In this post my aim is to prove that we cannot get away from exclusivity on matters of religion and God.

It is worth saying that your mounting distaste at this point is disagreement with Jesus, and not me, for he taught that he was the only true God and the exclusive means of attaining eternal life. I always marvel at history’s love for Jesus and the appreciation of this ideal itinerant preacher because it simply ignores what he taught; either, people are unaware of Jesus’ instruction or they prefer the repackaged and domesticated Jesus, happily remaining ignorant of what he really taught. So this post will also address the view of tolerance, which sees its role as rewriting history and redefining God in order to avoid arrogant exclusivity. 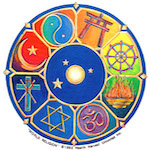 The first view, a type of radical inclusivity, is extremely dismissive of the divine for it denies him/her/it the ability to clearly reveal itself to creation, unless of course it is part of creation. It asks us to imagine a god who either has no qualms with being completely misunderstood and misrepresented or is simply incapable of making itself known. At the same time, this view says that all religions, with their widely divergent and distinctive theologies, are in fact wrong about who god is, owing to their specificity. The way this view would have us understand god is as some sort of ‘LCD god.’ More so, the problems that arise, over and above this view’s dummied down deity, is its arrogant claim to determine what God is like, and its illogical inclusion of contradicting theologies. For the sake of tolerance, this first view ignores the diverse richness of religion and replaces diverse beliefs with an inoffensive but vague god while making the offensive claim to define what that god is like, with the controlling attribute being transcendence. The second view – that there is in fact no god – has its own set of problematic assumptions. Essentially, and similarly to the first view, it concludes that every religion is wrong and therefore assumes itself to be the only right one. Since all belief about God is misled we are to conclude that disbelief has all the answers; proper knowledge, coming threateningly close to omniscience, is afforded to this select group of people, who we are meant to see as the possessors of exclusive truth. In my opinion, both of these views model proud exclusive claims, the type of claims that they set out to deny religion.

I hope you can see from my reasoning above that in many ways exclusivity is unavoidable. While the view of tolerance might be more palatable, it is not intellectually satisfying and is at many points quite offensive to or dismissive of more nuanced theology and religions.  The irony is that those who deny exclusivity in the name of tolerance do so from an intolerant and ultimately exclusive position.