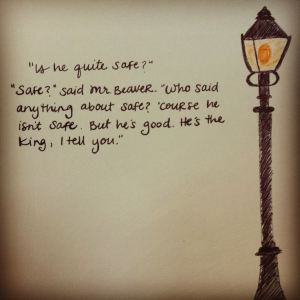 The number of times I have heard that line from C.S. Lewis’ The Lion, the Witch and the Wardrobe in the pulpit defies reason. I say this namely because I cannot remember a single sermon where the respective preacher used it to shed any light. It has been, in my own experience, tantamount to invoking the term “social construct” in debates, as if that settled anything. But if that is not reason enough, then its sheer abuse should convince us that it might be time to lay Mr Beaver’s epithet to rest (see Sammy Rhodes’ article on retiring sermon clichés). Lewis’ dangerous but good Aslan is somewhat opaque and seriously overused. Every time I hear it I struggle not to conclude that the only time the preacher reads is when he is trying to put his children to sleep.

This is obviously a theme in Lewis’ magisterial Narnia; when the children first meet Aslan we are told, “People who have not been in Narnia sometimes think that a thing cannot be good and terrible at the same time. If the children had ever thought so, they were cured of it now” (p168). Later, when Mr Beaver is warning the children against pressing Aslan or tying him to their kingdom he says, “He’s wild you know. Not like a tame lion” (p194). They are moving words for those familiar with Aslan, and inadvertently the God of Scripture, but used alone and apart from the context of Lewis’ work such sentiments are little more than mere sentimentalism. The Lion, the Witch and the Wardrobe is rich narrative that boasts compelling truth, evokes genuine feeling, and draws the reader into another world in a way few novels achieve. But we are fooling ourselves if we think a few quotes about Aslan’s indomitable but inviting nature do any justice to Lewis’ intention, or assist our own.

There is so much more to the novel (and all of Narnia) than these almost common quotes convey. Let me offer an example, which I would love to unpack further in a sermon or writing, touching on John’s Gospel. While the Witch gloats in Aslan’s death, to redeem Edmund and restore Narnia, some of Jesus’ last words before the cross come to mind, “Now is the judgment of this world; now will the ruler of this world be cast out” (John 12:31). A little later the Lord says, “The ruler of this world is coming. He has no claim on me, but I do as the Father has commanded me” (John 14:30-31). Before Susan and Lucy the supposed King of Narnia is shamefully shorn and cruelly slain on the Stone Table, and before Jesus’ disciples their supposed Messiah is mocked and executed; both events suggest the triumph of evil and the defeat of good. But hear Aslan’s words when the astonished sisters ask Aslan what (can only be described as) his resurrection means, “Though the Witch knew Deep Magic, there is a magic deeper still which she did not know. Her knowledge goes back only to the dawn of time. But if she could have looked a little further back, into the stillness and darkness before Time dawned…She would have known that when a willing victim who had committed no treachery was killed in a traitor’s stead, the Table would crack and Death itself would start working backwards” (p185). In his surrender to the evil powers of the world, he overcomes them. 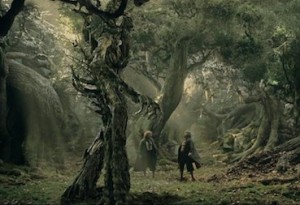 Finally, if that brief and slightly shoddy unpacking has not excited you to revisit Narnia then, please, for the sake of your congregation, drop Lewis’ overdone words; I will even provide you with a sacrificial substitute, from The Lord of the Rings. After Gandalf retells how he saw, and was indeed spotted by Treebeard, in the forest, Gimli remarks, ‘You speak of him as if he was a friend. I thought Fangorn was dangerous.’ ‘Dangerous!’ cried Gandalf. ‘And so am I, very dangerous: more dangerous than anything you will ever meet, unless you are brought alive before the seat of the Dark Lord. And Aragorn is dangerous, and Legolas is dangerous. You are beset with dangers, Gimli son of Glóin; for you are dangerous yourself, in your own fashion. Certainly the forest of Fangorn is perilous – not least to those that are too ready with their axes; and Fangorn himself, he is perilous too; yet he is wise and kindly nonetheless’.

« The Lion, the Witch and the Wardrobe: From Death to Life Does Barabbas' Release Illustrate Substitution? »
comments powered by Disqus