‘When Jesus is held back for execution and Barabbas is set free we have a wonderful picture of substitution.’ Have you heard that before? I have. Perhaps you have even explained this element of Jesus’ trial as an illustration of his place-taking death, which secures release for the guilty. Again, I have. But after working carefully through John’s Gospel in our small groups this year, I am convinced that I was wrong. Substitution is not in view; it is not even an ancillary aspect of Barabbas’ release.

Similarly to Paul’s ‘living sacrifices’ in Romans 12 – which preachers readily tell us is a strikingly strange picture, when really it is not since all sacrifices would be brought to the alter alive (Jonathan More) – we give little thought to this passage in its literary context, hurriedly sharing the pre-packaged theology of substitutionary atonement and old sermons. However, with only a little digging into John’s Gospel we learn that Jesus is not pictured as a substitute for Barabbas. Obviously, Jesus is introduced to us by John the Baptizer as, “The Lamb of God, who takes away the sin of the world” (1:29, 36). Added to this, substitution is clear at points throughout the narrative: Jesus will lay down his life for his sheep (10:11) and his friends (15:13), perhaps in response to Peter’s predictably overzealous promise that he will lay down his life for Jesus (13:37); Caiaphas’ ironic prophecy that it is better for one man to die than for Israel to perish (11:50; 18:14); and Jesus commitment to drain the cup of God’s wrath on the cross (18:11). But Jesus’ messiahship is more than dying on behalf of God’s people.

Interwoven with Jesus’ identification as Isaiah’s ‘suffering servant’ is his authority and power that demands a response from the Jewish nation. As C. H. Dodd has said, in The Founder of Christianity, “zero hour” was upon Israel; “God was confronting men, more immediately, more urgently, than ever before, and an unprecedented opportunity lay before them.” When Pilate presents Barabbas and Jesus (18:39), offering the customary release of a prisoner at Passover, the opportunity and choice reaches its climax. And when they cry out, “Not this man, but Barabbas!” they reject God’s King (18:40).

Andreas Köstenberger, in his essay “What is Truth?”, suggests that a prominent Johannine theme is the trial motif. He proposes that while there is no Jewish trial recorded in John’s Gospel, we can view John’s first twelve chapters as a trial. Jesus comes before the nation of Israel and powerfully demonstrates his divine sonship and authority. Israel is confronting her God. He has come to his own (1:11), full of grace and truth (1:17), fully revealing Yahweh in fleshly glory (1:14, 18). From John’s prologue, the reader knows who Jesus is. And a little later Nathaniel proclaims, “The King of Israel” (1:49). Now, if we return to the Jewish leaders, clamouring in the streets outside of Pilate’s headquarters, we see what John’s purpose is: Will they recognise God’s Messiah? There is immense irony in Pilate’s antagonistic epithet, “The King of the Jews” (18:39). For Jesus truly is. 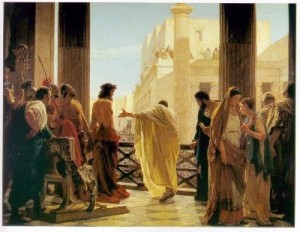 But there is more to it. There is an even more striking irony in the Roman trial and the Jewish leaders’ rejection of Jesus. Quoting D. A. Carson, in The Gospel of John, “The chief priests, who would normally have nothing to do with Zealots and…armed rebellion,” request the release of an enemy of Rome over one whom Rome deemed unthreatening (18:36-38). Pilate, in the obverse, and similarly to the Jews, fears for his political position, releases a man who was declared guilty by Rome for murder and insurrection. His conscience and superiors may have allowed him to condemn an innocent man without impunity, but surely releasing a known rebel reveals a lack of political savvy. Finally, the Jews, after rejecting their Messiah in favour of a convicted criminal, exclaim, “We have no king but Caesar” (19:15). Köstenberger notes that this is a pyrrhic success for the Jewish leaders, for in gaining Pilate’s concession they have pledged sole allegiance to the Roman emperor. Confronted by the Son of God the Jews make their choice and it is not God’s Messiah.

« Doodle: 'He's not Safe, but He's Good' The Horse and His Boy: Having Faith when it is Hard »
comments powered by Disqus