The Lion, the Witch and the Wardrobe: From Death to Life 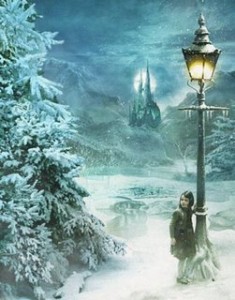 The Lion, the Witch and the Wardrobe is undoubtedly the most widely read and publically praised of the Narnia series. That makes writing this post harder than the previous one. For many people are familiar with this canonical piece from C.S. Lewis. The axis on which the book turns is both impossible to miss yet ironically, or conveniently, frequently overlooked: the death and resurrection of Aslan. So in this post I am going to concentrate on that central event, while hopefully bringing its surroundings into focus.

Narnia, where it is always winter but never Christmas, barely resembles the young, vibrant and vivid creation we encounter in The Magician’s Nephew. Lucy’s first meeting with Mr Tumnus the faun is awash with reminiscing of summer, when the forests were alive. Narnia is awaiting restoration, an irruption of new life. Signs of this transformation are manifold as the narrative moves towards its climax at the Stone Table. From the appearance of Father Christmas to the early marks of spring, Aslan comes nearer and Narnia anticipates renewal. Even Edmund, travelling in the terrifying presence of the White Witch can sense the change: “All round them though out of sight, there were streams, chattering, murmuring, bubbling, splashing, and even (in the distance) roaring. And his heart gave a great leap (though he hardly knew why) when he realized that the frost was over” (p164). The servile dwarf knows what they are seeing, “This is no thaw, this is Spring. What are we to do? Your winter has been destroyed” (p166). 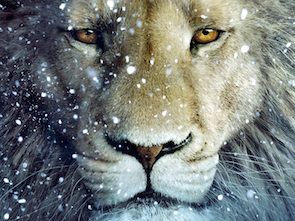 But we are getting ahead of ourselves. Another crucial aspect of Lewis’ tale is a theme he reproduced in much of his writing: the impotence of evil and the omnipotence of good. Leaving miserable Edmund with the self-proclaimed Queen of Narnia for a while, we come to the other Pevensies, and another loveable Narnian, Mr Beaver. With the news that Aslan is on the move, the children find in themselves an overpoweringly strange feeling evoked by his name, “like the first signs of spring, like good news” (p146). When they ask about Aslan, they are told that he is the King who will make all things right and rescue those in the Witch’s captivity. Then Mr Beaver recalls an old Narnian rhyme:

Wrong will be right, when Aslan comes in sight,
At the sound of his roar, sorrows will be no more,
When he bears bares his teeth, winter meets its death,
And when he shakes his mane, we shall have spring again 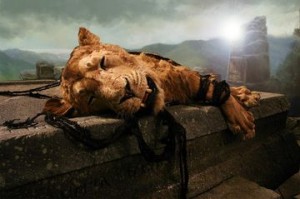 When asked if the Queen might turn Aslan into stone, as she does all her enemies, Mr Beaver laughs for no power can oppose the King of the wood, son of the great Emperor-beyond-the-sea. Though far from safe, Aslan is fully good. Another old rhyme is the reason the Queen is so interested in Edmund, along with all sons and daughters of Adam who might happen on Narnia: “When two Sons of Adam and two Daughters of Eve sit on those four thrones [at Cair Paravel], then it will be the end not only of the White Witch’s reign but of her life” (p148). Thus the danger is not in any way that the Queen might resist Aslan’s unchallengeable sovereignty; she must keep the Pevensies from him, that is her only chance of impeding the promised spring, new life wrought by Aslan himself.

This brings us to Aslan. When the Pevensies meet Aslan, for the first time, we read, “People who have not been in Narnia sometimes think that a thing cannot be good and terrible at the same time. If the children ever thought so, they were cured of it now” (p168). Later, we are told that Lucy could not figure out if playing with Aslan was more like playing with a thunderstorm or a kitten. Aslan is at the same time both frighteningly indomitable and invitingly friendly. The children cannot endure his “great, royal, solemn, overwhelming eyes” without trembling and averting theirs (p169). But Lucy boldly pleads for Aslan to save Edmund, his reply is heavy with anticipation of what is to come, “All shall be done. But it may be harder than you think.” And for the first time, Lucy notices sadness on Aslan’s face. As we skip ahead we can contrast this with the “look of fierce joy” on the face of the Witch, following her discussion of the Deep Magic with Aslan (p176). After issuing battle plans to Peter, Aslan sets off for the Stone Table, with Susan and Lucy following quietly behind, “He looked somehow different from the Aslan they knew. His tail and his head hung low and he walked slowly as if he were very, very tired” (p179). The glorious King heads up the hill towards the Stone Table, to his own death by cruel hands, greatly saddened and alone.

Importantly, the tension here is not between good and evil, for we have already noted that evil has no claim over good in Narnia; what we are invited to witness is how Aslan surrenders his life, better yet, lays it down, to save the one who betrayed him. This heart-breaking scene is not a defeat but the grandest demonstration of both his love and sovereign power. Ironically the Witch asks: “Now, who has won? Fool…you have given me Narnia for ever, you have lost your own life and you have not saved his. In that knowledge, despair and die” (p181).

Susan and Lucy approach the dead lion feeling unbearable sadness and utter hopelessness. Aslan lies dead. But the story does not end with death, it heaves into the great newness of life promised by spring. For “though the Witch knew the Deep Magic, there is a magic deeper still which she did not know…if she could have looked a little further back, into the stillness and the darkness before Time dawned…She would have known that when a willing victim who had committed no treachery was killed in a traitor’s stead, the Table would crack and Death itself would start working backwards” (p185). Evil does not triumph over good; Aslan’s absolute love puts all wrongs right and brings all sorrows to an end.

« The Epistle of James: Wisdom and Works Doodle: 'He's not Safe, but He's Good' »
comments powered by Disqus