The Horse and His Boy: Having Faith when it is Hard

The Horse and his Boy is my favourite of the series, but also many people’s least. This is due to a few reasons, of which I will highlight just two: most seriously the charge of racism; and, from a literary point of view, its marginal overlap with the rest of the series. But we must remember the metanarrative of Narnia, which Alister McGrath says is set between two great “advents”, the past redemption (The Lion, the Witch and the Wardobe) and future restoration (The Last Battle). Recalling our point from The Magician’s Nephew, that C. S. Lewis invites readers to inhabit and experience the Christian story, The Horse and his Boy explores the tension of living between Aslan’s first and last coming in a world beset by evil and characters burdened by doubt. 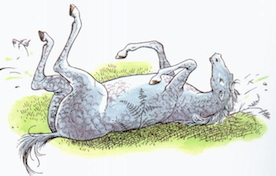 The first character we will explore is the Horse, Breehy-hinny-brinny-hoohy-hah, better known as Bree. Bree grew up in Calormen and lived as an enslaved warhorse. Though he longs for the North and freedom, he has much to learn. His strength, military success, and self-assured confidence make him the natural leader in the journey northward, but also cause him to be full of hubris. Towards the end of the narrative, his pride threatens to keep him from Narnia; Hwin realises Bree is apprehensive about venturing beyond the Southern March because his tail is damaged (p298). After their flight, Bree grieved his cowardice in the pursuit that saw him abandon the party for safety (p275). He concludes that he is disgraced and unfit for Narnia, but the Hermit incisively addresses Bree’s problem, “You’ve lost nothing but your self-conceit…You’re not quite the great Horse you had come to think…as long as you know you’re nobody special, you’ll be a very decent sort of Horse”. Aslan punctures our self-confidence; Bree had to learn that we are all unfit to approach Aslan, and abandon acceptability on his own terms. He needed to hear Aslan’s comforting invitation, full of tenderness, “You poor, proud frightened Horse, draw near. Nearer still, my son. Do not dare not to dare” (p299). 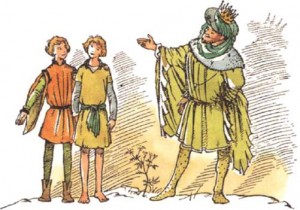 The second character I will unpack is the Boy, Shasta. One might call him the unlikely hero for, unlike Bree, he is unimpressive and by far the least imposing of the travelling party. However, there is a lesson to be learnt from this observation. As Shasta plods along the misty and frigid mountain pass, Aslan walks alongside and speaks with him. Shasta is miserable and lost, “Being very tired and having nothing inside him, he felt so sorry for himself that the tears rolled down his cheeks” (p280). But Aslan tells Shasta that he was the one behind all of his misfortune and terrible luck (p281). When Shasta returns across the treacherous path, with the Archenlanders, he reflects on his conversation with Aslan, “I was quite safe. That is why the Lion kept on my left. He was between me and the edge all the time” (p290). This realisation, I think, is indicative of Shasta’s entire life, for Aslan was always with him in the confusing cloud, guiding the events in order to bring him back to Narnia, and himself. Reflecting on this brought another of C. S. Lewis’ works to mind, in Perelandra we read, “God can make good use of all that happens. But the loss is real.” Shasta’s life is full of unfortunate happenings, yet he is the unlikely hero, for unknown to him Aslan is mightily at work in his world to make all things right.

A repeated motif in Lewis’ narrative is Aslan’s insistence on telling the characters their story and no one else’s. In To the One who Conquers, Sam Storms reflects on how the biblical story has a remarkable capacity to challenge and overcome our misconceptions about who we are. Bree revealed the common combination of pride and guilt; he needed to learn that belonging to Aslan he could neither earn his place in Narnia nor  jeopordise his security. Shasta, on the other hand, could not believe that the many misfortunes of his life would end in anything but tragedy, because he was unaware of the sovereign and loving presence of Aslan who worked through all things to bring him closer to himself. Aslan is the person in whom all stories connect, but everyone needs to approach him as they are, alone.

Other posts in the Chronicles of Narnia series: