The Jokes We Tell 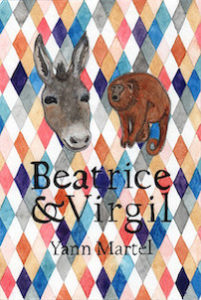 A friend recently returned my copy of Yann Martel’s Beatrice and Virgil. Though it has been almost 2 years since I read it, holding the book in my hands resurrected much of the intense emotion I experienced when reading it. Parts of the book are harrowing, others horrendous, yet the brilliance of the writing makes it almost impossible to put down. I must admit that I will need to reread it in order to elucidate Martel’s finer points for myself. Yet the raw and wrenching reaction is, I think, more towards the author’s intention.

After the story has ended Martel provides us with what he calls ‘Games for Gustav’. While giving us a clearer window into actual situations in which many Jews would have found themselves, positing impossible but necessary decisions, these short and somewhat macabre ‘games’ draw out real heartache and sympathy in the reader. I want to quote just one of them, and trust that you will get hold of the book, and allow yourself to be confronted by the ‘games’,

Afterwards, when it's all over, you overhear a joke.

At the punch line the listeners gasp, bringing their hands to their mouths, and then they roar with laughter.

The joke is about your suffering and your loss.

What is your reaction?

Martel is, if you did not know, writing about the holocaust. Without detracting from his purpose or denying that there are things I have said about the issue which I deeply regret and need to repent of; I want to highlight one place where I believe this sort of hurt is felt today, and is perpetrated by many Christians. It is in the jokes we tell about homosexuals.

One of my closest friends and most encouraging brothers in Christ is gay. As we have walked alongside each other - for more blessed years than I can care to count - he has taught me very much and given me a small window into the struggles that someone who is a Christian and homosexual experiences. Our wonderful friendship often involves him trying to explain the “burden of discomfort, shame, fear, hurt and ostracism” (to use his own words), and me failing to grasp the weight of that burden.

In a brilliant sermon I listened to a while ago, Matthew Jenson speaks about the experience of homosexual desires being ‘excruciating and confusing, desires that heckle and haunt people.’ Our careless words and ‘harmless’ jokes may be gutting someone unknowingly. That person may even be amongst your own group of friends, rather than a person ‘overhearing a joke’. I wonder if you have considered that.