The Futility of Fighting Sin with Sin

I think I may have started to find narrative more persuasive and more compelling than propositions (that's quite a step for me). Again I have been thinking about Tolkien's Lord of the Rings, this time I have been thinking about sin through Tolkien's spectacular metaphor of the ring. After Shelob's lair - potentially the most exhilarating episode in the book - Sam believes Frodo to be dead and, after some deliberation, comes to the realisation that the responsibility of bearing the ring has fallen to him. This means that Sam carried it briefly and, for a short time, even wore it. My interest is the battle of wills that ensues as Sam puts on the ring.

The objective of the fellowship has always been the defeat of Sauron. The objective is a good one. It is the means of that objective being fulfilled that shifts and it is in the shift that Sauron would triumph. Sam barely wears the ring but simply having it hanging around his neck gives him courage and makes him fearsome in the eyes of orc enemies.

Already the Ring tempted him, gnawing at his will and reason. Wild fantasies arose in his mind; and he saw Samwise the Strong, Hero of the Age, striding with a flaming sword across the darkened land, and armies flocking to his call as he marched to the overthrow of Barad-dûr. And then all the clouds rolled away, and the white sun shone, and at his command the vale of Gorgoroth became a garden of flowers and trees and brought forth fruit. He had only to put on the Ring and claim it for his own, and all this could be.

Were he to wear it and try to wield it, it would certainly destroy him. His will would be engulfed in the will of Sauron and his good desire to defeat Sauron would turn into the evil desire for the power; the power for which Sauron himself longed (this is the vice of the ring; into it was poured all of Sauron's evil will such that it will corrupt the will of whoever wears it).

While Sam's desire to defeat Sauron remains and is still good, conflicting desires flare up that are evil and as Tolkien allows us briefly to peak into Sam's ring-induced imaginings, we are exposed to the subtle yet perilous shift in means. Sauron's defeat need not come at the expense of the ring; Sam is tempted by the idea that in his own power (with the help of the ring), he could overthrow Sauron. The seductive but errant notion that the defeat of evil need not come at the expense of evil. 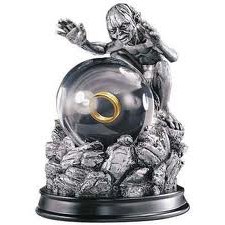 The concept is illuminating. How often I now find myself using a sinful means to try to defeat sin. Allow me to illustrate, a man beats his wife. He knows it's wrong but he constantly finds he succumbs to the temptation. He realises, however, that should this be discovered he would lose his reputation - a reputation that has become an idol to him. He therefore puts a stop to beating his wife in order to maintain his reputation. Of course, he would still beat his wife if no one could discover him. What's more, the sinful passion that was fed as he found satisfaction in his sin will only find another outlet. Worst of all, in my opinion, he willfully feeds a sinful desire.

On the contrary, Sauron will not be defeated by the use of the ring, only by its destruction. Sin will not be defeated by the use of sin. This is why we are urged time and again to "put to death" "the deeds of the body" (Romans 8:13) and "what is earthly in you" (Colossians 3:5). Sin cannot be wielded for good, it can only corrupt. It began in Eden with a desire to be like God - a good desire (which will be accomplished by Christ in us) - but a sinful means in the serpent's whisperings to Eve, "You need only eat the fruit and claim it for your own, and all this could be." How often I take the bait.

Evil can only be overthrown by direct assault, only the pursuit of righteousness will defeat evil. So my exhortation is, "put to death whatever is earthly in you" and "clothe yourselves with compassionate hearts."

« What is the Gospel: Back to and Beyond Eden How can God become King? The Son of God and Jesus Christ »
comments powered by Disqus