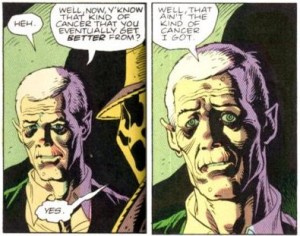 Since first seeing the film in 2009 and subsequently as well as hurriedly reading the graphic novel, I have found The Watchmen fascinating. Few stories, in my opinion, so cleverly provide the backdrop for philosophical conversation, raise such interesting questions about morality, and underline the sense of hopelessness often experienced in our human condition. But my purpose in mentioning The Watchmen is not to unpack its many vivid themes; I simply want to point out one of its more poignant episodes to introduce this post. Following the death of the Comedian, Rorschach is bent on tracking down the “mask killer” and breaks into the home of the former arch-villain Molech, now Edgar Jacobi, an aged and dying man. After discovering illegal cancer medication Rorschach asks Jacobi what kind of cancer he is suffering from, and his response is almost heartbreaking: “Well, now, y'know that kind of cancer that you eventually get better from? Well, that ain't the kind of cancer I got.”

Those words were in the back of my mind as I prepared a talk on technology for the teenagers at my church. I made the point that when it comes to cancer we have led to believe it is only a matter of time until we can cure all forms, for technology’s march is unrelenting. We might even think, If the fictional Jacobi lived in our 21st century then he most likely would not be living his long defeat. But let me state a highly unpopular possibility: we may never eradicate cancer. Unfortunately that is the reality facing all of us who inhabit a creation bound to decay, groaning for redemption. Please do not think I am for a second making light of cancer and the immense suffering it causes, for those with it along with those who stand by them and are often left behind. Let me also say that this is not a post about cancer. However, I think it is a presumptuous and proud view endemic to many of us, which is convinced it is only matter of time before cancer is conquered by medical research. Furthermore, I worry that many of us fall into the trap of ascribing a godlike attribute of unassailability to technology, that which we have made with our own hands; we begin to worship the created rather than the Creator. 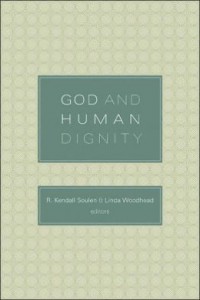 As Elaine Graham says in her essay, The “end” of the human or the end of the “human”?, “For some commentators, the advent of new technologies will protect us against physical disease and vulnerability. Technologies, long the means of enabling humanity to compensate for physical limitations by providing instruments of comfort and utility, now offer the opportunities to overcome the limitations of the flesh entirely.” In the same paper Graham paraphrases the prominent atheist David Noble, doing his best parody of a preacher, exclaiming how new technologies are “instruments of deliverance…possessors of the power to transport us their users into a sacred realm of ‘transcendence,’ free from the encumbrances of the flesh.” She notes how the arrival at this new religious cult, which even reproaches “techno-pagans” (Erik Davis), is traceable to the Enlightenment mood, or secular humanism, “In its emphasis on personal liberty, free enquiry, and self-determination.” What we are seeing is, “A distortion of modernity's faith in the benevolence of human reason, producing the hubristic belief that humanity alone is in control of history.” Technology, etymologically meaning “craft” or “skill”, has been transfigured from servant to Saviour; technology that was once held in our hands, now has many lying prostrate at its feet.

The great danger in this modern assumption of unassailability is not merely that it disappoints our faith in it, but that it subtly derails our faith in the Creator God. Paul to the Romans, which I have alluded to above, writes that our present sufferings are incomparable with the glory to be revealed, our hope of redemption that is now unseen. Technology might never eradicate cancer; it will never bring about redemption and glorification. And we must resign ourselves to that first clause, lest we fall into the trap of believing it might offer us the latter. Elaine Graham rightly asserts the distinguishing mark of humanity as a species is the imago Dei, “Understanding of human creativity as participation in divine creativity.” Technology is a gift from our Creator, who has made us like him, to be creators. We are endowed with dreams that become designs and ultimately realities. Yet Graham concludes that we cannot forget that our creativity is framed within our creatureliness and interdependence, “This offers a necessary reminder that our technologies are ultimately not our own, that our inventions, like the whole of creation, make sense only when offered up as part of a larger, divine purpose.”

I have addressed two related idolatrous attitudes in this post, so I will conclude by trying to pull them apart. The first is the hubris of modern secularism, which tries to convince us that humanity controls history, as the masters of our fate and captains of our souls. This is closely tied to the second, more beguiling, attitude that is overawed by the apparently inevitable progress of technology. It is this second attitude that is incredulous at my statement: “We may never eradicate cancer.” And I think it is this attitude many Christians living in the 21st century undiscerningly adopt. We will do well to remember that we cannot set this groaning creation free from decay and futility, regardless of how far our technology takes us.