In my last year of high school, for final assessment, I was summoned for external moderation on my English portfolio. Back then we had to list five books we had read during the year, three non-fiction and two fiction titles. Though that transcended the borders of impossible for my eighteen-year-old self, discovering reading as a young Christian meant that today I engage with more books than ever before but unfortunately have no moderation board to discuss them with. Enter you. In an attempt to atone for missed opportunities I will offer quick reviews of three theological books and two novels I have read this year that, incidentally, I think you would do well to read yourself. (I will include a brief quote from each hopefully to whet your appetite). 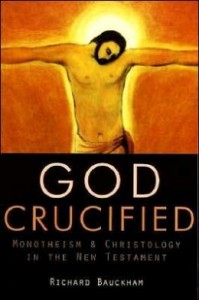 God Crucified: Monotheism And Christology In The New Testament by Richard Bauckham. To my shame and loss I never investigated Richard Bauckham at college. In God Crucified he presents a sharp and succinct treatment of Second Temple Judaism and why Jewish monotheism did not rule out the possibilities of other hypostases in God’s nature and being, revealed in the Old Testament. Bauckham argues that the early church did indeed possess a high Christology, which was entirely consistent with Second Temple Judaism. This flies in the face of skeptical readers of history and Scripture who believe that the full divinity of Jesus Christ was only reached through a process of creedal developments along with the increasing influence of Hellenistic philosophy and categories. But Bauckham does very well in attempting, very briefly, to show that the writers of the New Testament were convinced that Christ being fully God did not challenge the Jewish understanding of God’s nature. I am very much looking forward to reading his expansion of this work, Jesus And The God Of Israel.

“[The] identity of the God of Israel does not exclude the unexpected and surprising…God's freedom as God requires his freedom from all human expectations, even those based on his revealed identity…He is both free and faithful. He is not capricious but nor is he predictable. He may be trusted to be consistent with himself, but he may surprise in the ways he proves consistent with himself" (p71-72). 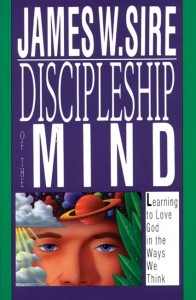 Discipleship Of The Mind by James Sire. Most coffee dates in Cape Town with my friend Marcus included some discussion of Christian worldview. And Sire’s book was always mentioned as the key work in laying foundations for engaging with our world, its thinkers, philosophies and ideas. Having read Discipleship Of The Mind I can now echo Marcus’ recommendation. Sire does not attempt to critique other worldviews in this volume, as he does in The Universe Next Door , but instead provides crucial and pointed distinctives of the Christian worldview, which inform our engagement with other worldviews and also give confidence in the terra firma of Christian intellectual endeavor. This should be a set work for any theological student and prescribed reading for every Christian, not that those two groups do not overlap.

“Knowledge and belief are in the same categories. Both have to do with matters of truth…When a claim is made for the truth of the Christian religion, the response comes back, “It’s true for you. But it doesn’t have to be true for me.”…Countering this view is very difficult. The “value” of tolerance is so ingrained on campus, that any exclusive claim is rejected before it is considered rationally. Of course, it follows – as night follows day – that if the God of the Bible exists, he exists…His existence is fact. So is any moral orientation he may have” (p101). 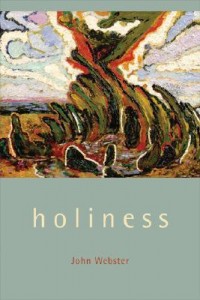 Holiness by John Webster. In usual fashion I came late to the party and only latched onto John Webster in my fourth year of theological study. That was perhaps providential since his writing is very, very demanding. Holiness was helpful in writing my dissertation on sanctification and this year I was able to give it some undivided attention. Despite its brevity I am tempted to say that Webster’s offering is too difficult to distill, probably because I still have not fully comprehended it. The introduction establishes the grounds of Webster’s work: dogmatic and Trinitarian. These are vital distinctions because from the outset Webster is free to present Christian theology, traditionally and historically, as well as ultimately scripturally, on its own terms; and most basic to these terms are God’s self-revelation and presence as Trinity. In the rest of the book Webster provides an invaluable argument for God’s holiness, which is both positive and negative, he shows how Christians enjoy ‘alien sanctity’ (to borrow Barth’s language), and how important these aspects of holiness are for Christian life. Webster also has a chapter on ‘Scripture as holy’, the sanctified creaturely word. And this is where most Evangelicals will part ways with Webster, as well as where I need to seriously engage with his arguments (Carson has done this in Collected Writings On Scripture). Webster’s writing is rich, refreshing and required.

"But, if fellowship is a condition and not merely one possibility for my ironic self to entertain, then in building common life - in culture, politics and ethics - I resist the relationlessness of sin into which I may drift, and, sanctified by Christ and Spirit, I realize my nature as one created for holiness" (p97). 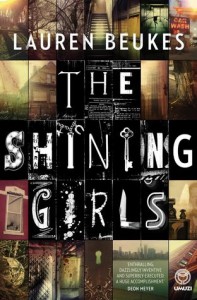 The Shining Girls by Lauren Beukes. For the first time in my short history of reviewing books I can say I am on the cutting edge as this title was only released last month. I was spellbound from the first page. When you look past Beukes’ fascinating observations about people, the way they think, and life in general, you are encountered by a grippingly complex thriller moving backwards and forwards through 60 years, and between compelling characters. Though less futuristic and otherworldly than her earlier works Moxyland and Zoo City, Beukes retains the mysterious and vivid collision of grittiness and the ethereal that made those titles so intriguing. But to that she has added a familiar landscape, setting the narrative in Chicago, anywhere between the depression and vibrant 90s. While less imagination is spent on conjuring up the unrecognisable future, more is required in trying to solve the genius of a murderer who is not bound by time, except perhaps his future.

"He is tracing his fingertip over the lines drawn between the stars transfixed. Big Dipper. Little Dipper. Ursa Major. Orion with his belt and sword. But they could just as easily be something else if you connected the dots differently. And who is to say that is a bear or a warrior at all? It damn well doesn't look that way to him. There are patterns because we try to find them. A desperate attempt at order because we can't face the terror that it might be random. He feels undone by the revelation. He has the sensation of losing his footing, as if the whole damn world is stuttering" (p252). 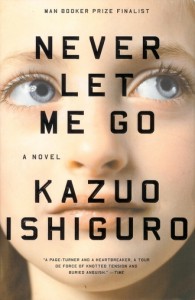 Never Let Me Go by Kazuo Ishiguro. Lastly, Ishiguro and his story that I unfortunately encountered on screen (in the 2010 film adaption, screenplay by Alex Garland) before paper. Somewhat of a desperately hopeless gauntlet from beginning to end, Ishiguro’s sparse style matches aridity of the narrative. His characters are engrossingly developed but never over-complicated. The combination of this and Ishiguro’s matter-of-fact writing leaves the reader wanting more from every page, either because the haunting simplicity of reality expressed is disturbing or merely that each scene, conversation and reflection begs for expansion. This is a book that you will abhor and adore simultaneously, both for good reasons. If you fail to feel the overwhelming sense of loss and wishful longing – which is often understated as ‘a sad novel’ – then you have failed to let the narrative sink in.

“I keep thinking about this river somewhere, with the water moving really fast. And these two people in the water, trying to hold onto each other, holding on as hard as they can, but in the end it’s just too much. The current’s too strong. They’ve got to let go, drift apart. That’s how I think it is with us. It’s a shame, Kath, because we’ve loved each other all our lives. But in the end we can’t stay together forever” (p282).