Out of the Silent Planet: Modernism and Malacandra 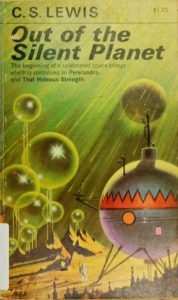 “To you I may seem a vulgar robber, but I bear on my shoulders the destiny of the human race. Your tribal life with its stone-age weapons and beehive huts, its primitive coracles and elementary social structure, has nothing to compare with our civilization – with our science, medicine and law, our armies, our architecture, our commerce, and our transport system which is rapidly annihilating space and time. Our right to supersede you is the right of the higher over the lower.”

These are the bold words of the scientist Weston, confronting the Oyarsa (the godlike, benevolent leader of Malacandra) at the finale of Lewis’ first installment of his Space Trilogy. When Ransom translates this into Old Solar he simply says that Weston did not consider genocide of the Malacandrians, to further the progress of humanity, to be “bent”, evil or wrong.

Weston continues, “Life is greater than any system of morality; her claims are absolute. It is not by tribal taboos and copy-book maxims that she has pursued her relentless march from the amoeba to man and from man to civilization.” Ransom struggles to translate, “living creatures are stronger than the question whether an act is bent or good…it is better to be alive and bent than to be dead”. Weston announces that the superiority of mankind justifies them to stretch their empire across the universe, throughout Deep Heaven. While reading this I could not help but notice the similarities of Weston’s philosophy to the primitive modernism that came with the Enlightenment.

Darwin’s natural religion came with great hubris, and was reinforced with cultural superiority and domination. Though few people would agree today with the European mindset of the 18th and early 19th century which saw those who lagged in the evolutionary march as inferior not only in the realm of science, medicine and the likes but even when it came to our genes. Thinking back to the dialogue from Lewis, Weston thought that progress of the human race would come about through the advancement of natural science, how much we can control by it and where it could take us. Without lessening the great gifts of the Enlightenment, modernism promised to improve the human race but could not for the fact that the emphasis was on everything else but humans themselves. Though quality of life and command of nature are good things, they are in and of themselves external to the human problem. This human problem shows itself in the attitude of Weston, and the natural religion of Darwin.

The Oyarsa of Malacandra puts the human problem quite well, “In your own world you have attained great wisdom concerning bodies and by this you have been able to make a ship that can cross the heaven; but in all other things you have the mind of an animal.” Once mankind, but more specifically the West, established themselves as superior in everything ranging from culture to social structures then they are not far from imperialism, enslavement and extermination. Through the developments of science we can, I think, rightly pat ourselves on the back for the great capacity for knowledge and advance we possess. But the danger is that we forget what we actually are. Life extends beyond laboratories, hospitals and classrooms to communities, families and cultures. I can understand why existentialism arose in angst against modernism; and why it carried through to full flower in postmodernism that tore off the dangerous shackles of imperial modernism.

Weston went to Malacandra, in an attempt to win ground on which humanity might multiply; only, it would be as effective in making people better, as trying to improve the skills of footballers by giving them a larger field on which to play. Obviously this depends largely on how we define “better” and what we think constitutes progress. But modernism offered little of what most people would understand as fixing the problems that are endemic to human nature, furthermore it offered little to nothing in bolstering culture, the arts and so on (you only need to Google ‘modern architecture’ for proof of this). What does any of this matter? As a Westerner, and a Christian, I think we need to be very careful that we do not enact a new imperialism. The biblical picture of Isaiah 60 and Revelation 21-22 depict a renewed, perfect future in which we retain our cultural differences. Therefore every human culture has inherent good and distinct strengths for the enrichment of the human race. Scientific advance does enlighten our minds, but can do little if anything to change hearts. Christianity has too often been rightly critiqued as eradicating cultures which were and replacing them with Western culture. Weston threatened domination of Malacandra and anything else that stood in the way of his enterprise, we should be careful we do not end up doing the same.

All the quotations above are from chapter 20 of Out of the Silent Planet, unless otherwise stated.

« Book Reflection: Drops Like Stars A Light that Shines in the Darkness »
comments powered by Disqus