Matthew: The Temptation of Christ 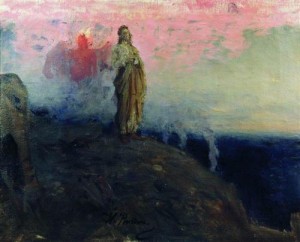 At his baptism, Jesus is called God’s “beloved Son” (Matthew 3:17), he is then partnered by the Holy Spirit and sent into the wilderness to be tempted (4:1). Having been identified with Adam (clearer in Luke’s account) and Israel by the designation ‘son of God’, Jesus’ sonship is tested before his kingdom preaching commences (4:12-17). That means the temptation narrative is pivotal in reading Matthew’s Gospel. Unfortunately this important passage is often sketchily treated and underappreciated. So in this short post I hope to impress on the reader the gravity of Jesus’ meeting with Satan in the wilderness.

An important place to start is by asking if there exists a thread through the temptations. New Testament scholar David Seccombe argues, in The King of God’s Kingdom, that Jesus is being lured by false methods to achieve his messianic role. Jesus is not merely having his commitment to God tested; his commitment to the messianic office is being tried. So in each temptation Satan offers Jesus an alternative means of becoming promised king. Firstly, Satan tells Jesus to turn stones into bread. ‘Provide the people with their physical needs. Fill their stomachs and they will follow you.’ But Jesus’ reply suggests the people have a greater need, to hear the preached word of God. Secondly, Satan suggests that Jesus throw himself from the temple, the centre of Jewish life, requiring that God send hosts of angels to deliver him. Such a miracle would compel belief, win allegiance and clearly demonstrate that this is God’s promised king. But Jesus’ answer indicates that it would at the same time express unbelief in God, testing his faithfulness and dictating how he should act in his world. Lastly, if Jesus will only worship Satan then he will receive the kingdoms of the earth. Being ‘the prince of this world’ I would argue there is some weight to Satan’s offer, but Jesus’ response is uncompromising devotion to the only Lord God. Jesus knew that his messianic task could not be carried out in any way other than worshipful obedience to God the Father. As Shane Claiborne writes in Jesus for President, ‘In each of the three temptations Jesus resisted the spectacular, legitimising himself as the Servant-King’. Jesus was truly tempted, because the task set before him was overwhelmingly daunting.

The next question to ask might be: What does Jesus’ resistance to Satan’s temptation signify? In Matthew’s Gospel the simple answer is victory. Looking ahead, at 12:29 where Jesus says the strong man must first be bound, C. H. Dodd comments in The Founder of Christianity that implicit to Jesus’ teaching is that, “he had cleared scores with the devil before his work began, and he could carry on his campaign into the enemy’s country unhampered”. N. T. Wright makes the same point in Simply Jesus about Jesus’ temptation: Satan tried to bring Jesus over to his side, grasping the right goal but through the wrong means. Jesus’ temptation spelt the beginning of Satan’s defeat. Yet Jesus’ kingdom parables reveal that Satan’s opposition to God will be on going, as the kingdom advances (13:19, 38). According to Jesus’ words in 25:41, the final victory over Satan will only come at the end of the age. The victory over Satan in Matthew, and larger scope of Jesus’ ministry, poses a real challenge to the ‘classic or ransom theory’ of atonement, which understands Christ’s death as a payment to Satan for the ownership of humanity. In his ministry, kingdom proclamation, and the cross, Jesus was bringing about the defeat of Satan, binding him and loosing his reign over the kingdoms of earth. 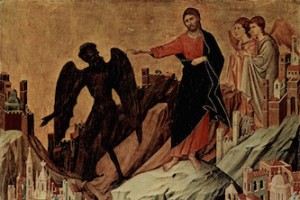 Finally, something which entire post could be written of, is the theme of temptation further developed in Matthew’s Gospel? I would argue that it definitely is, not only in general but specific to the three temptations Jesus endured in the wilderness. Jesus showed twice that he could miraculously provide bread in abundance (14:13-21; 15:32-39). When he was arrested in Gethsemane he asked, “Do you think that I cannot appeal to my Father, and he will at once send me more than twelve legions of angels?” (26:53). Lastly, prior to his arrest, Jesus lies prostrate before the Father in desperate prayer yet submits himself to the Father’s will (26:39). He refused to establish a ‘bread circus’, he renounced his right to the angelic hosts, and he resisted the temptation to worship anything and anyone but his Father in heaven. Jesus carried out his messianic role without erring; though agonisingly tempted to use other means, his loving submission to the Father and his self-sacrificial love for us drove him ever closer to the cross.

« Some Dangers of Theological Study Was Jesus Really Tempted? »
comments powered by Disqus