Jenson on Hegel: Philosophical and Trinitarian Principles for Relationships

Earlier this year, for my systematics course, we discussed the modern issues surrounding Trinitarian theology I got to work on as essay dealing specifically with the difficulties regarding our doctrine of the Holy Spirit. While the readings – from luminaries such as T. F. Torrance, George Hunsinger, and Colin Gunton – were stimulating and helpful, it was the slightly unorthodox theology of Robert Jenson that grabbed my attention. And it is one particular point Jenson makes which I hope to draw out and apply in this post.

Jenson points out that one of Western theology’s major shortcomings is the trend (perhaps traceable to Augustine’s “bond of love”) to envelope the Holy Spirit within the other two Persons of the Godhead, reducing the Holy Spirit to the Personal Trinity’s capacity, void of any real personal capacity. Highlighting this problem in Karl Barth’s theology, Jenson notes that the Spirit is seen more prominently as the fellowship between Father and Son and not a partner of that fellowship. Similarly to Augustine’s phrase, Barth’s famous expression for the Spirit was, “the mediator of communion”. And according to Jenson, in practice we own an “I-thou” trinitarianism, which could more accurately be called binitarianism.

Jenson believes that the 20th century philosopher Hegel, whom he calls the greatest expositor of “I-thou” ontology, provides a helpful corrective for understanding relationships, both divine and human. Hegel was convinced that if persons are to be free for one another they must be both subject and object in their converse. But in a purely “I-thou” relationship a person can evade availability as an object, thus enslaving the other person. Relationships thus become open or hidden struggles for domination. Each person is vying to be the subject, or master, making the other party its object, or slave, intentionally or subconsciously. 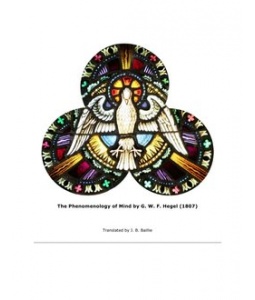 Hegel felt that mutually accepted objectifying and availability cannot happen without an intrusive third party who liberates the two parties and makes them free for one another. His solution to the “I-thou” impasse is that both subjects need to be objects of another. Otherwise each party can’t help but guard against increasingly becoming the object, by striving after ascendency as the subject. Jenson suggests that herein is the answer to many of the issues in modern trinitarian theology: Father and Son are free to love each other only when the Holy Spirit objectifies them, as subject the Spirit’s intention is mutual love between its objects.

Whether you fully understand Jenson’s pneumatological development based on Hegelian philosophy or not, let alone agree with it, it’s the corollary application I hope you’ll find helpful. You might think Jenson has overlooked significant answers the West does give, such as taxis in the Trinity and the monarchy of the Father, hierarchy without ontological inferiority. I remain unconvinced by process theology and the implications it has for trinitarian theology, such as the ontological derivation of the Son and Holy Spirit (a hallmark of Eastern theology). But that being said, Hegel and Jenson present us with a valuable principle for relationships, even if we have to limit it to the human sphere.

The principle that we can derive from Hegelian philosophy, which Jenson hints at, is the necessity of a third party in human relationships. Hegel argued that we see this in marriage, where a child (the intrusive third party and subject) objectifies its parents as well as serves as a mutual object of their love. Jenson goes a step further than Hegel in saying friendships that are too exclusive will wither or become destructive. Conflict and confrontation over hegemony is the destiny of relationships that don’t make room for a third party. To paraphrase Jenson, if I am to be your object, and you mine, there must be one for whom we are both objects, whose intention is our mutual love. That is accountability, friendship and God’s design for human relationships. It is also a warning that most of us need to hear today.

Nearly all of what I’ve said above is a summary of Robert Jenson, in the first volume of his Systematic Theology: The Triune God (1997), p153-156. If you are brave then you can find the relevant sections on p104-116 of A.V. Miller’s translation of Hegel’s Phenomenology of the Spirit (1977).

« Doodle: Perseverance or Preservation of the Saints Yeshua and the Crowd »
comments powered by Disqus