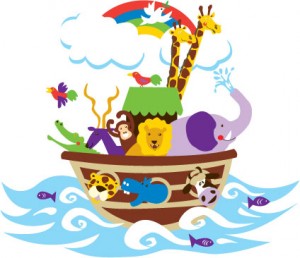 As the dust settles around Noah and Christian audiences set their gaze (or crosshairs) on Son of God I thought I would throw some brief and no doubt far from novel thoughts into the cooling cauldron of Aronofsky’s film. James has written a balanced post here; though making many qualifications, he suggests three features that we ought to appreciate and discuss. For despite the movie failing to clearly communicate the message of Genesis 6-9, many of its details and interpretive salvos are colourfully thought provoking, even helpful. However, in this post, I want to highlight areas where Aronofsky’s eisegesis contributed to the film’s failure in conveying Noah’s story, immediately embedded in Genesis and ultimately the seedbed for all of Scripture.

From the outset of the film “the Creator” is palpably distant. This God, tending towards silence, gives Noah dreams. The interpretation of these dreams is however not offered by God but rather through an encounter with Methuselah the mystic. Noah is not lead by God but left by him, to ponder what on earth the Creator hoped to tell him. To risk pointing out the glaringly obvious, in Genesis we read that God spoke to Noah (see 6:13; 7:1); later he would establish a covenant with Noah and reiterate the promises of the Abrahamic covenant (8:20-9:17). But perhaps the most significant detail is found in Genesis 6:9, “Noah walked with God,” casting our minds back to Eden when God walked with Adam and Eve (3:8). The picture is one of closeness and intimacy, indicating that Noah was in the presence of God. Yet Aronofsky’s Creator is vague and unclear, leaving Noah to not only piece together the dreams but also determine the course of human history, which almost backfires when he decides to end human progeny. Aronofsky’s God is more akin to Dawkin’s “blind watchmaker” or George Lucas’ “Force” than the personal presence that we meet in Genesis, walking with and talking to his creation. To steal the wording from a post I wrote a while back: in Noah, God is denied the ability to reveal himself to what he has made, as we are asked to imagine he either has no qualms with being completely misunderstood and misrepresented or is simply incapable of making himself known. Without suggesting that Noah was unsure, even unconvinced about what God promised to do, we must maintain that his doubts were never because God was unclear. 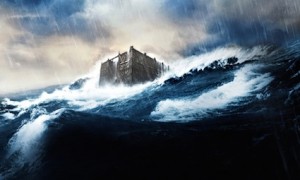 I agree with James that Aronosky clearly showed the need for mercy in the light of evil. However where the film missed the mark was in its depiction of sin, which was implicitly defined as the mistreatment of creation. The city dwellers, led by Tubal-Cain, thought that their God-given dominion justified a rapacious handling of the created world. I have written regarding the covenant of creation, here and here, where I showed that Adam and Eve were appointed as custodians, rather than conquerors, over creation. This task involved faithful obedience to God’s authority, retaining the created order where God rules what he has made through his image-bearers. Therefore, responsible rule is not measured in care for the creation but submission to the Creator. Sin, seen in exploiting the environment or fratricide, stems from disobedience to God. Wickedness may become manifest in the abuses Aronofsky vividly portrayed, but is ultimately defined by man’s relation to God rather than what God has made. Aronofsky’s Noah completely muddied this point. Surely Noah’s description as righteous and blameless man, who walked with God (Genesis 6:9) means more than that he had green fingers. Oppositely, the wickedness of Tubal-Cain and his followers is grander than their distasteful misuse of creation. Unwittingly the film comes close to showing sin for what it is – in fleeting references to Eden as well as Tubal-Cain’s final speech – but this is unfortunately obscured by Aronofsky’s redefinition, away from obedience to the Creator and towards worshipping the creation.

The details might be unclear, because the Creator is vague, and the verdict of wickedness imprecise, because the urgency for environmentalism is an easier implication than repentance. Yet in the film, Noah correctly diagnoses humanity, as inherently evil. The solution he reaches is startling: the rebirth of creation cannot happen without the death of mankind. Tentatively, in closing, I want to suggest that Noah’s disturbing conclusion is not far from biblical truth. The curse of death is God’s just ruling for a world that has, since the Adam and Eve, embraced the rebellion of our first parents. More than simply embracing it, the biblical as well as empirical evidence shows that we are enslaved to it. Paul says that only one who has died has been set free from sin (Romans 6:7). Through faith we are united to Jesus in his death (6:5), the old self is put to death with him (6:6). This has brought about not only the hope of resurrection life in the future but also newness of life in the present (6:4). Paul exhorts those who have died to live to God and die to sin (6:10-11). Here Noah, the apostle Paul, and John Calvin collude, “[It is] as if God had declared that for us to be reckoned amongst his children our common nature must die" (Institutes 3.3.8). But the magnificent news is that this happens through the nearness of God, initially through union with Christ in his death and through the ongoing presence of the Holy Spirit.