From Babylon with Pride 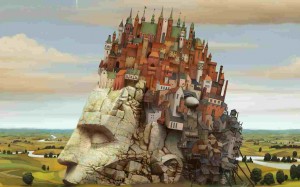 It’s been a minute since I last wrote a post. Apparently that’s the new way of saying that it’s been a while. As to why the new street slang uses a phrase like “been-a-minute” to describe a long period baffles me; and I don’t want to attempt to comprehend it. But let’s talk about something that’s a bit less complicated: the story of Babel (which is ironically about the complication of language).

I was getting excited this morning about the stuff I want to do with students next year. One of which was the unity of the Bible story; and how one can appreciate a single theme as it runs through the pages of the Old and New Testament. The excitement grew as I thought about themes like ‘The presence of God and the Temple’, ‘the king of God’, ‘The Mountain of the Lord’, ‘the city of God’. All of these can be traced out through the History of Israel in the Bible, which climaxes in the story of Jesus’ death and resurrection, continues in our own time and to which we look forward to in the coming of the New Heaven and New earth. And let me share an exciting thought that I had re the Story of Babel and how it unfolds.

It began in Babel with pride; the first United Nations meeting was held. And there was a unanimous decision to build a City with the tallest sky-scraper as a symbol of unity and human pride. “Let us make a name for ourselves” these guys said (Gen 11:4) so that we won’t scatter. With every effort possible, humanity attempted to unite and conquer. With one language and one vision, this city was to be the best invention to keep unity and peace without God in the picture.

Will the plan succeed? Well of course trying to have peace and unity without God is not only prideful but also impossible. And God saw their pride and their plans and he began to scatter them. God turns the lights off and the party is over and everyone has to go home. So, the prideful effort to unite against God falls flat on its face and it achieves the opposite. Trying to have a party without inviting the party master is not such a great idea. Thus Babel became the foundation of bricks and mortar and the epitome of prideful humanity that never succeeds in trying to dethrone God with human ingenuity.

With the entire world scattered and nations no longer united, God’s plan was that though the church(bit of a jump) his name and his ingenuity would be known. Starting with a man called Shem (meaning Name) he would make his name great: from Shem to Abraham to David to Jesus. This is a short story of how God built a gathering of people who would unite around him. And throughout the history of Israel we see wars and disunites, nations rising and nations falling, humanity rising against God. From Egypt to Graeco-Roman society God had been building an alternative community, as Tim Keller would say it 'city within a city'. Despite the continual effort of humanity to make a name for itself, God advertises it through his redemption of Israel from Egypt; his establishment of Israel as a nation through the Law e.t.c. God chooses a people to himself and unite them to himself. 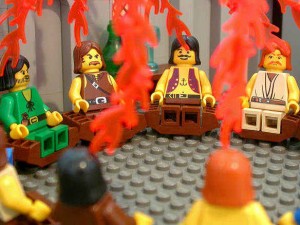 And it is at Pentecost that the mercies of God are displayed. Because of the death, ascension and resurrection of Christ, God pours out his Spirit upon believers and they all begin to speak other languages (Acts 2). And what is more, people who were not initially belonging to his nation(non-Jews) now join in through the same Spirit(Act 14). And we therefore get a picture of how the Gospel truly unites people. That through the work of Jesus humanity can truly unite, and through the work of the Spirit this unity is put into effect. There is no Jew or Greek or Barbarian. It's all cool, the church is established and humanity can be truly united and freed from the oppression of sin and pride.

But the story does not end there. The world still rebels against God. Babylon(synonymous with Babel) the great Prostitute and the mother of all Prostitutes will still be destroyed. Prideful humanity still wants to wield its power against God and against his people. Christians are still caught in a society that wants to reject God. Many ideologies other than God provide an attractive City of mortar and bricks that promises unity without God. But the Gospel and the church provide true unity. And the story draws to an end with many nations, from different people group and languages gathered before the throne of God (Rev 7: 9-13). All with their sins dealt with because the work of Christ(Rev 7:14). And it ends with a City who builder and architect is God (Rev 21) with Sin dealt with, God with his people, and sinful humanity destroyed.

And the coolest thing is realizing that unity is ultimately found in God and the gospel. And not only that but we also see the beauty of God's wisdom in our times through the church. Living in a diverse country like South Africa, one is likely to get a taste of what it means to be united in Christ with people who are different from you. So the story of the Bible is about God gathering people who were previously scattered because of Sin. And if you are not part of that story, you are missing out on something big.

Trying to have a clearer and concise summary of this story would require more effort. But this is a blurry effort to try to make sense of what's been interesting me... Comments, criticism allowed...