Doodle: Resurrection Bodies and The Silmarillion

This year our small groups have worked through Paul’s first letter to the Corinthians. With us fast approaching the end of this apparently eclectic, immensely encouraging, and sin exposing epistle we have spent the last few weeks in chapter 15. What struck me in preparation was Paul’s contrast of our present earthly bodies and promised heavenly bodies (see 15:35-58).

The biggest contrast Paul draws is between our perishing present and the imperishable future. He writes, “flesh and blood cannot inherit the kingdom of God” (15:50). The Corinthians could not fathom how the dead would enter heaven (15:35), but Paul’s answer is that even the living are unfit for heaven for they need to become imperishable (15:42). An explanation of the material between these two points is that Paul stresses continuity between our earthly and heavenly, natural and spiritual, bodies. This continuity undergirds the entire section but what the Corinthians needed to learn was that our present bodies made from dust are perishable. The problem is not that the dead cannot be raised but rather that the perishable cannot inherit the imperishable (15:50). Our bodies need to be changed, transformed and clothed with immortality (15:52-54). The resurrection does not only mean that bodily death poses no threat to our hope of heaven; it promises that we will be made imperishable and fit for heaven.

What does that have to do with Tolkien’s The Silmarillion? I think that an episode towards the end of Tolkien’s masterful myth clearly illustrates the point made by Paul. In the Akallabêth, the Númenoreans, a mighty line of Men also known as the Dúnedain, yearn for the West, being enamoured by the undying lands of Aman they are embittered that their lives are tied to Middle-earth. Their unrest is told to the Valar by the Elves and it comes as grievous news. Manwë, one of the Valar, sends messengers, “who spoke earnestly to the King, and to all who would listen, concerning the fate and fashion of the world.” They told them there is no profit in voyaging to the Blessed Realm for, “There you would but wither and grow weary the sooner, as moths in a light too strong and steadfast.” There is no hope in leaving the perishable world, for their fate is intertwined with it. But even if they were to sail from Middle-earth to the Blessed Realm, the question Mandos, another one of the Valar, asks earlier about Eärendil rings loudly, “Shall mortal Man step living upon the undying lands, and yet live?” 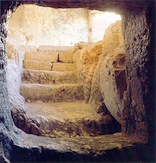 To quote Paul in 1 Corinthians 15:53, “This perishable body must put on the imperishable, and this mortal body must put on immortality.” What guarantee do we have of this? “Christ has been raised from the dead, the firstfruits of those who have fallen asleep. For as by a man came death, by a man has come also the resurrection of the dead” (15:20-21).

« Exodus: The Journey of God Our Desires are Met in God »
comments powered by Disqus