In his small masterwork, The Great Divorce, C.S. Lewis tells the peculiar story of a Ghost being confronted by an Angel. Sitting upon the Ghost’s shoulder is a small lizard, incessantly whispering in his ear. The Ghost is heading back to whence he came because the lizard, who promised to remain silent, repeatedly disturbed the silence of the liminal plain, separating the dark lands and the effervescent mountains, heaven. This is where enlivening conversations take place and the prospect of becoming complete people is presented to comparatively frail and insubstantial ‘Ghosts’ from far off. I really hope you read the entire book. If not then the chapter concerned can be found here.

The Angel offers to free the Ghost from the lizard, who has a powerful hold over him. Despite being embarrassed by it and having to limp away from the splendidly hopeful mountains, back to the dislocated and desolate place he came from, it is unthinkable that the Angel must kill the lizard in order for him to be free. It is an odd event in the narrative. But what is it about?

When the Angel begins to uncouple the lizard and the Ghost it is agonising for the latter. Amidst the dialogical fireworks, the lizard furiously pleas for its life and swears it will be obedient in the future. The Ghost doubts he can endure the hurt, of losing his little companion, or going through with the painful parting that he knows will mean restoration. The Angel needs permission from the Ghost before removing the lizard and giving the Ghost his freedom. Though his suffering feels like dying the Ghost realises, “It would be better to be dead than to live with this creature.” 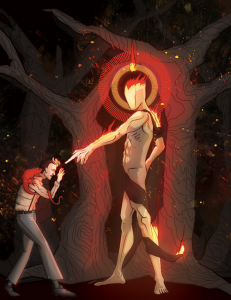 Then, “the Burning One closed his crimson grip on the reptile: twisted it, while it bit and writhed, and then flung it, broken backed, on the turf.” Before the eyes of the narrator the Ghost begins to grow “solider”, “brighter” and “immense”. But something happens to the lizard too. Far from dying, it grows bigger and is transformed, becoming a splendidly silver and white stallion. He who was previously a mere Ghost, leaps onto the horse’s back and together they ride like a shooting star towards the mountains, “into the rose-brightness of that everlasting morning.”

What does it mean? Why did Lewis devote a whole chapter to tell this story? Is he explaining the desperate difficulty of conversion, dying to our self? Is it a picture of mortification, the agony of stripping away the old nature? Perhaps it is an example of the tension between human responsibility and God’s gracious salvation. Could it be the prolepsis of a prevalent theme in Till We Have Faces, as Rowan Williams puts it, “The impossibility of forcing any person to accept love and the monumental and excruciating difficulty of receiving love when you are wedded to a certain picture of yourself”? While these are fascinating interpretations I am going to suggest something else: a thought I had reading David VanDrunen, Living In God’s Two Kingdoms (especially p43-44).

The cultural mandate, given to Adam and Eve, was to rule and exercise authority over creation. They were to protect the Garden’s holiness, as faithful and obedient custodians. Their covenant with God meant that any challenge or attempt to usurp the Creator’s rule and his imprinted authority on them was to be destroyed. But they, as well as us today, are not the creaturely sovereigns he intended us to be. For the serpent, both a tempter and an intruder, was allowed to defile God’s pure Eden through Adam’s failure in exercising his kingly dominion. The regrettable result of this is highlighted by the author of Hebrews, who says we do not see everything subject to man, as it was meant to be (2:8). So presently the natural world is outside our sphere of control; we are at odds with its formidable force. This is not what the Creator intended. We were created to rule. But Adam’s careless inversion of the created order, placing himself under the dominion of the serpent, would have lasting and disastrous effects for his heirs. 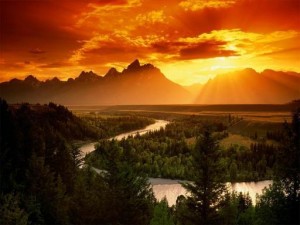 The picture that Lewis paints in this chapter is of wondrous restoration, reclamation of the Creator’s order. What was undone and reversed in Eden is put right. The Ghost no longer cowers beneath the lizard’s persuasive weight. He is not entrapped by its subversive whisperings. He now towers over the glorious stallion as a more magnificent ruler. Lewis’ picture forces our gaze to that everlasting morning. Despite standing somewhere in between, we are not stranded but hopeful, sure that God is making all things new; he will re-invert what Adam wrecked. This is one of the things Lewis does so vividly in The Great Divorce, and throughout his other works; he enlarges our view of glory and God’s restoration.