Doodle: Was Calvin a Calvinist? 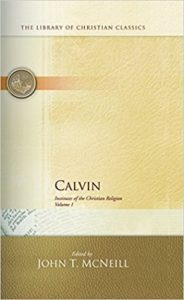 I can still remember it as if it were yesterday, though it was something like 7 years ago. I had been a Christian for around a year and my growth had been nourished by the ongoing conversations with my youth leaders, as well as sitting at their feet as they discussed the higher, hallowed ground of my newly discovered faith. As an inquisitive 18 year old, I loved to sit within earshot of my leaders thrashing out – what I would later know as – theology. And a name mentioned in those discussions more often than others was that of John Calvin, the 16th century Reformer. Though, to be fair, I probably only knew him as Calvin; his (first name,) historical context and immense influence in the development of Protestantism was unknown to me. Yet I knew this: Calvin was the root of another word, ‘Calvinism.’ And Calvinism, which could simply be summed up with the acronym TULIP, was his major contribution to theology.

And now we are approaching the point (I use this word loosely) of my doodle. The moment which I remember so plainly was the first time I got hold of John Calvin’s Institutes. But turning up the contents page, to my dismay and sheer horror, I found that the book wasn’t structured into five headings, beginning with (1) Total depravity, (2) Unconditional election, and so forth. There weren’t even five, but only four, chapters! And to further my astonishment, these chapters were called ‘Books.’ What was going on? “How could this be?” Had I not stumbled onto the writings of another John Calvin, who happened to also written an Institutes? Because I knew that John Calvin’s theological system turned on 5 major points, “It does. Doesn’t it?” No. It doesn’t. The Synod of Dort might have had 5 points, in answer to Jacobus Arminius' theology. Calvinism might be put plainly, simply stated under those 5 points. But let’s stop pigeon-holing John Calvin into every Reformed Protestant’s favourite acronym.

Allow me to make two points in conclusion. The first is that Calvin’s theology is much richer, diverse and more glorious than those tired headings. The Institutes present a more cohesive and grand theological system than TULIP ever did, or could. I am not suggesting that he does not develop and draw on aspects of what we would call Calvinism, but to argue that they are the touchstones of his theology is going too far. The second point, which is more of a challenge to both reader and myself, is that we should be reading Calvin instead of trading in overly simplified phrases that are becomingly increasingly embattled, just think of (3) Limited atonement. You might disagree with everything I have said. But if you’re going to do that then you need to first suspend the idea that TULIP does the best job of explaining Calvin’s theology (my first point) and dust off the Institutes to find out for yourself if I’m wrong (my second point). But whatever you do, please stop reducing John Calvin to Calvinism, simply for namesake.