Should We Still Say The Apostles' Creed?

I grew up in a confessional church, but that is not to say that we were familiar with our confessions. They were those documents that were only made available on request. In such cases, I have little faith in the inquiry of adults, much less children. I left my childhood not being able to express with clarity what it was that I truly believed. But perhaps even worse than poor articulation, was not knowing the indispensable truths about the gospel. My confession then was simple: I am a Christian. And while that was true, it was self-centered and scant.

Compared to my immature confession, we find one far superior in Romans 10:9, “Jesus is Lord”. It was perhaps the simplest and earliest creed used in the early church and is one which does not merely point away from self to the only true savior, but it pierces beyond religion into culture, politics and every area of life. This was not a cheap phrase indicating denominational preference. On the contrary, this creed could cost you your life. 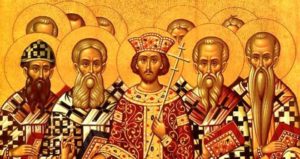 There is another creed which has been universally accepted as a declaration of Christian belief — the Apostles’ Creed. Before the New Testament writings were readily accessible, such a concise presentation of Christian beliefs would have been a useful servant to evangelism and was used as a confessional interrogation at baptism. But should we still be using it today?

When you recite a creed you are setting yourself apart from those who do not. However, across the broad spectrum of churches and denominations, the Apostles’ Creed has always united. While I have used the terms freely up until now, a creed is in fact distinct from a confession. A ‘confession’ dives deeper into the specific doctrines that divide groups while a ‘creed’ expresses precisely what all the associated groups have in common. When we say the Apostles’ Creed we are speaking with one voice across all Christian groups, throughout time, declaring the irrefutable truth of Scripture. As believers we must, with confidence, be able to say it.

But what about the virgin birth? Is it really such an essential doctrine? Is Jesus coming back in judgement, or will just love win? Do I need to believe in the church as well or is Jesus enough?

These are not minor open-handed issues. The virgin birth, the death, resurrection and return of Christ, even the holy universal Church, are essential to the faith and have been throughout the ages. Let’s not be foolish to think that our latest church experience, some new trendy philosophy or societies fluctuating tolerance levels could ever shake that.

While we declare these beautiful truths found in the Apostles’ Creed, we might not always feel very passionately about them. In fact, we may not even be reflecting on the truth we are saying at all. Unfortunately, our culture has pressed us to value sincerity and authenticity above all things. In fact, it unashamedly denies truth every day for the sake of ‘feelings’, and not only as it combats religion but has even turned to deny the science it has so long sponged off. Science and religion must now make way for authentic feelings. What rubbish! I digress.

In response to this I want to first say how much I do value feelings. Feelings are a blessing and a grace, especially when they prompt us to align ourselves with God’s Word. They are a reminder that God is concerned with all of man and not just our minds. In fact, I have found that when information has been accompanied by the appropriate feelings, together they have been a far greater teacher than had the truth come alone. But our feelings are not always faithful. Truth however is always true and the inauthenticity of our delivery cannot touch the authenticity of the truth we declare. We believe the Gospel because it is true, and we declare the Creed because it expresses that truth.While we should always challenge ourselves to be thinking deeply on the words we say, we do not stop saying them if we feel otherwise today, because our feelings do not determine whether the words are worth saying or not.

My final point is brief. The Gospel must be said. Truth must be said. The Creed must be said. “Jesus is Lord” is not something just to be believed in the secret places of your heart. You must also confess with your mouth. “For with the heart one believes and is justified, and with the mouth one confesses and is saved” (Romans 10:10). Words are not the things we only ‘use when necessary’. Spoken words are indispensable both in salvation and evangelism. Just four verses on in Romans we read “How then will they call on him in whom they have not believed? And how are they to believe in him of whom they have never heard?” (10:14). You see, audible words of truth being declared individually or together with the congregation is a tradition we have not just received from church history, but from God’s Word itself - “proclaim it from the rooftops” (Matthew 10:27).

« The Work of Christ: More than God's Justice Pastor, Why Do You Want a Big Church? »
comments powered by Disqus