Reflections: The Starved Space of Improvement 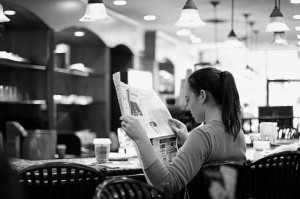 I discovered a lovely little place the other day while walking the many little streets of my neighborhood. Most of the attention usually falls, quite naturally, to the bustling street with broad pavements and many windows to peep into. But here, on the small narrow road, only 2 blocks long, I found a place which quickly sheltered me from the gusty winds which had suddenly picked up. I was delighted straight away as I entered to see how quaintly this old house had been transformed into the very place any young lady such as I might want to explore. And as the air stilled as I stepped inside I was welcomed by Clair de Lune, a very familiar friend who I had spent much time with growing up behind the ivories, and the homely smell of fresh bread, curry spices and the aroma most captivating to me – coffee on the brew (but there was no judgment present as might be in the thoughts of my acquaintances as they read).

I found so much delight in these simple sights, sounds and smells with the result that my imagination and creativity was immediately illuminated.  It seems antonymous but it is practically inseparable how the imagination is accelerated when the mind is calm; how we often chase after those peaceful moments of reflection. And so as I took a seat in solitude I began to read my new yet dusty pocket edition of F.W. Boreham’s Mushrooms on the Moor. I have taken to his writing quite incessantly and obsessively and at the expense of other authors on my shelf. I was fortunate enough to come across his essays when an old friend cleared out a ton of books of which I was able to sort through and pick and choose from. But on this gusty day, hidden inside, I began to reflect on why I was so attracted to his writings in particular.

If there is a quality so desirable and admirable about a person, text, melody or art, should we not investigate as to why? Often I find myself and hear others saying ‘I just like it’ or ‘I just enjoy it’. But what is it about it that we just love to like and enjoy? Today it seems the culture to simply embrace who you are without question, leaving a starved space for self-improvement; “I am like I am just because, so I like what I like just because I like it.” But if we were intentional about discovering why we like what we like, we could also intentionally implement what we find in our own expressions.

I must clarify however, that none of this is intended to produce imitations, but rather the intent is to notice the good things, the likable attributes, the admirable qualities in others, ask yourself why they are so, and begin the process yourself. I think when one does that it will become clear that often the thing most captivating is not the act itself but rather the attitude and goal behind it which is expressed in the act. And consequently one might find oneself in a very different place at the end of the road from where they started. Indeed for myself instead of meditating on the refined expressions of others, and more specifically the unavoidable truths revealed in Boreham’s daily reflections, I ended up meditating on my own ability to conclude truth from my daily experiences. While it may have begun with external observation and analysis, the end result was a deeper searching inside of me to ensure I possessed those more captivating qualities, attitudes and attributes.

In conclusion, if I wish to be an effective youth worker the answer is not to necessarily mimic others I’ve seen be effective, but to ensure I have those elementary attitudes of love and concern for people which produce effective relationships. If I desire to be a good speaker and teacher I first need to ensure I have the heart and passion to dispense valuable truth, life-saving and life-transforming truth. And if I want to be a better communicator of truth I need to value it myself and search hard for it in every area of my life; not only in between pages but in between my every breath.