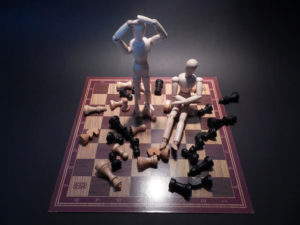 I want to address a common objection at this point.

One of the most thrown around lines in management blogs is “What gets measured gets managed”. This is held alongside “Measure what matters”. The idea is that we work to impact the numbers we are held accountable for, and so good leaders ensure people’s attention is focused on the right numbers. Some circles within the church respond to this by saying that the things that matter for us can’t be measured, because they’re invisible, bringing everything I’ve said to naught. How can you assign a number to an increase in love, or servant heartedness, for example?

Don't miss the wood for the trees

The first thing to say in response to this is that, just because some things can’t be measured, doesn’t mean there isn’t a lot within the church that can have a number assigned to it. Many of these aspects are important, and can be measured with basic metrics.

Know your role and focus on that

The second thing to say is that it is sometimes better to measure the inputs we are responsible for, rather than the results God is responsible for. Since love is something God is responsible for producing in Christians, something we have no direct influence on, we are better off measuring whether we are providing an adequate context for growth in that area. That would be the difference between saying, “We want our members to be loving” and “We want our members to have worked through teaching about love, to be part of a smaller fellowship group, to have a close friend in the church, etc”. This approach sometimes turns that which doesn’t seem measurable around.

Be realistic and creative

Lastly, there are times that what we are aiming at is our responsibility, but it is still subjective. For example, we could say we want our members to serve according to their gifts. Then we take the following approach: we ask a sample set of people to score a statement on a spectrum; something like, “My ministry involvement matches my gifts”, or “I see many people at our church whose ministry involvement doesn’t match their gifts”. That will give us an aggregate rating across a spectrum. Asking that same question, in the same way, over a longer period provides a temperature gauge. As soon as the temperature changes (when it deflects from the historical norm), we are moving closer to or further from our goal.

So, how can you put a number to the intangibles? Well, a few ways. Can you think of anything in church life my suggestions above wouldn’t cover?